Even on a smaller property, the fight against non-native invasive plants can seem never-ending. No sooner has one great Oriental Bittersweet vine been eliminated than seedlings are popping up everywhere; Japanese Barberry resprouts vigorously from the cut stumps, and Japanese Stilt Grass moves in behind the banished Wineberry. And yet, we keep trying! The question that we often ask ourselves is whether it is even worth the effort.

Spring ephemerals like Trout Lily are among the wild-growing treasures that may be uncovered by those who remove invasive plants from their properties. Photo by Donna Quinn

Kerry Bzdyk explained that one large corner of her property was so choked by Chinese Privet that she had never set foot there. Finally, last year, she and her family set about clearing a looping pathway using a small electric chain saw and clippers to cut down the privet, then carefully painting the stumps with glyphosate to kill the roots without disturbing the soil. They found a grove of Pawpaw (host plant for Zebra Swallowtail caterpillars) and stands of Blackhaw Viburnum (nectar for native bees) just about holding their own, but now with space to flourish. This spring, a newly revealed stream was host to Yellow Trout Lily, Spring Beauty, and Cutleaf Toothwort, with Jewelweed starting to show up. Kerry is continuing to make inroads on the privet, now more motivated than ever to give our beautiful natives space to thrive.

Abby Seeley shares the vision of “returning the woods to natives” and has adopted a rhythm of doing a little every day to avoid feeling overwhelmed, and a triage approach to rescue the native trees that she feels are in most trouble from the invasives. She finds herself focused on Oriental Bittersweet, whose thick, tightly twisted vines can strangle a tree; and Autumn Olive, which not only spreads aggressively, shading out natives, but is also allelopathic, changing the soil chemistry so native plants can’t grow. Working slowly, mostly with hand tools, allows her to get to know each tree and avoid taking out ecologically valuable natives in the understory. Abby documents the before and after so that she can look back and feel good about what she has done. In an area she cleared last year, she can see that the viburnums are noticeably bigger, and ferns are volunteering. She has found Sassafrass, Hornbeam, dogwood, and Slippery Elm, which are all important caterpillar hosts and provide nectar, berries, and nuts for wildlife at various times of year. Knowing that her work on invasives is enabling these natives to flourish gives Abby great satisfaction. 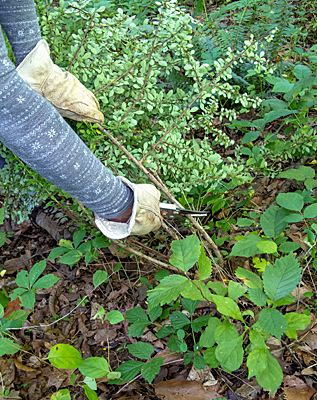 Hand-clearing Japanese Barberry among Elm seedlings and ferns is hard work that’s worth the effort. Photo by Anne Owen

On my own property, I spend a few hours each week tackling invasives in a modest two acres of woodland. Dense, tangled areas of Multiflora Rose, Wineberry, Oriental Bittersweet, Barberry, and Japanese Honeysuckle cover large areas, but slowly cutting those back and killing their roots is revealing oak, Hickory, dogwood, and Black Cherry tree seedlings, along with Spicebush, Coralberry, and spring ephemerals like Mayapple and Jack in the Pulpit. That leaves me feeling excited that there is hope for a healthy understory. Japanese Stilt Grass is, sadly, well established, but I do pull Garlic Mustard when I see it in an effort to stop it becoming widespread. Every so often I’m excited to come across something I’ve not seen before, and taking the time to consult iNaturalist for an ID is fun  — unless of course, I find yet another non-native has popped up.

So is all this effort worth it? Well, realistically, I think we all know that we will never be successful in eliminating invasive plants from our remaining natural areas. However, we have all observed a resurgence of native plants in places that we have been able to clear of the worst offenders, and we know that once the native plants come back, so do the critters that depend on them. The key seems to be to set modest goals in terms of scope, prioritize the invasives to tackle, and be kind to yourself in celebrating even modest progress. I feel sure that we can — and do — make a difference.