Summertime and the Butterflies are Beautiful 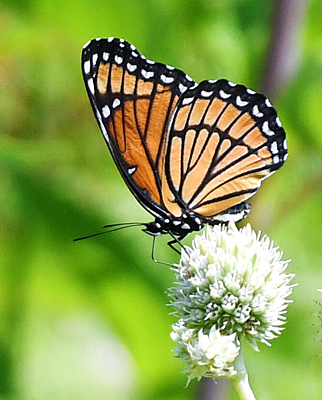 The summer heat has settled in and that means it’s time to look for butterflies.  Led by Anne Ellis and Michael Myers, about 20 of us including families with small children, met at the farm stand on July 17 to begin the search for these lovely pollinators along the Willowsford Conservancy’s Farm Loop Trail. Next to the farm stand is an excellent planting of Virginia natives including the unusual-looking Rattlesnake Master and American Blue Vervain, where we saw some of the small, fast butterflies called Skippers. We moved on to the wet meadow where Wild Bergamot is in full bloom — a real pollinator magnet.

It didn’t seem like many butterflies were in flight but as we strolled slowly around and through the meadow, we identified 17 species. We did not find any Monarchs but one of our young participants pointed out a Viceroy, which mimics the Monarch, quietly sipping nectar on New York Ironweed. We also sighted the large Cloudless Sulphur, searching for its favored host plant, Senna, which has been found in the area. Another highlight was finally getting a good look at a small black butterfly: Horace’s Duskywing.