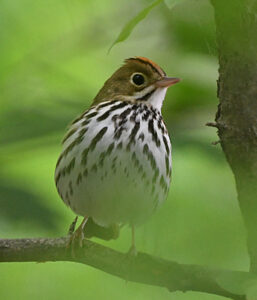 The second public bird walk at JK Black Oak Wildlife Sanctuary took place on May 12 and was attended by seven participants under sunny skies and light winds. As usual it was very birdy at the parking lot, and we quickly found Gray Catbirds, Indigo Bunting, Common Yellow-throated, a fly-over yellow-billed Cuckoo and a distant Wood Thrush.

Near the Fairy Shrimp Pool we heard Ovenbirds and Yellow-breasted Chats but we never got good looks of the birds. Further along one of the trails, to our delight, we found a female Yellow Warbler. She was pretty much in the same location as we had a breeding pair last year. Our best stop of the walk was the LeSabre Pond. The group found a Louisiana Waterthrush and White-throated Sparrow foraging along the mud flats. Higher up in the trees it was a coming and going of warblers such as Black-Throated Blue, American Redstart, Black-and-white, Yellow-rumped and Tennessee Warbler. A couple of Wood Pewees were present in the area too, but they were quiet.

Led by Gerco Hoogeweg, the group ended up with 58 species for the trip which was by far the most species we have recorded in a single trip at the property. The full trip list can be view online at https://ebird.org/checklist/S88035961 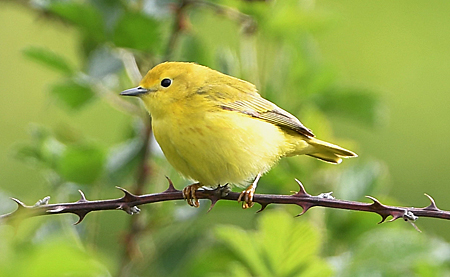