Shrike Force, comprised of Laura and Liam McGranaghan, Mary Ann Good, and Joe Coleman began its 48 hours of birding at 4 p.m. on May 6. We wrapped up about 3:30 p.m. on May 8 after finding 113 species of birds, a River Otter, a Beaver, Red Foxes, a Monarch butterfly, and feasting on a chocolate birthday cake. 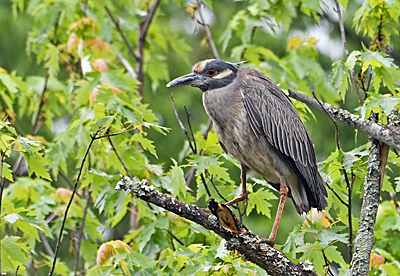 Inspired by Michael Myer’s recent articles in the Habitat Herald, we began at the Olde Izaak Walton League Pond in Leesburg. While the noise from the neighboring bypass was almost overwhelming,  we found both Oriole species, warblers, and an American Coot there. We then made our way to Meadowbrook Farm Ponds where we found shorebirds and two Horned Larks. Continuing on to the Dulles Wetlands, which LWC has helped the Greenway steward for almost 25 years, we watched a Bald Eagle carrying a squirrel to its nest and a beaver carrying food to its hutch in the center of the wetlands. We also found two Hooded Merganser females along with a Double-crested Cormorant, several White-eyed Vireos and Swamp Sparrows.

While owling on the way home we heard several Barred Owls.

Friday morning, we greeted the sun high on the Blue Ridge and were fortunate to still have Mary Ann on the team before she flew off to Costa Rica. On the ridge, one of our favorite spots, we found the first of our Red-breasted Nuthatches as well as Hermit Thrush, Rose-breasted Grosbeak, and Yellow-throated Vireo.

On the way to the Blue Ridge Center for Environmental Stewardship, we stopped at a pond along Edgegrove Road in Hillsboro. It yielded 41 species including an Osprey, both Oriole species, Warbling Vireo, and five different warbler species.  At the Blue Ridge Center, which is not only one our favorite locations but always one of the most productive, we spent almost three hours and found 51 species of birds. These included two Yellow-breasted Chats and nine warbler species, including Cerulean, Canada, Kentucky, and Blue-winged. 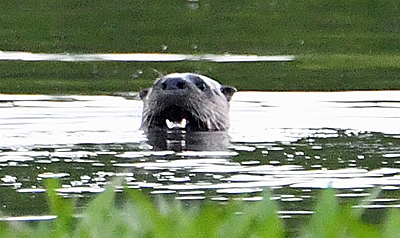 On Saturday morning we paid a visit to Bles Park. Because all of us live a good distance from there and visit it infrequently, we weren’t sure what to expect. Bles Park, a small county park which borders the Potomac River in eastern Loudoun and is only a couple miles north of Loudoun One, ended up being an unexpected jewel. While the park includes several playing fields and is across the street from an apartment complex, it demonstrates what’s possible when natural areas are preserved and protected. We not only found numerous birds there but also a River Otter playing in the same wetlands where we found a male and female Blue-winged Teal, numerous Wood Duck ducklings, and three Pied-billed Grebes. Along the shore of Broad Run, which borders the park to the east and empties into the Potomac, we found a Yellow-crowned Night-Heron, a Loudoun County rarity, perched in a tree.

Before heading back to western Loudoun to finish the day near Bluemont, we stopped at the Broadlands Wetlands Nature Preserve and the Middlesex Drive Pond where we found several more species. In western Loudoun we were pleased to find that at least a dozen Red-headed Woodpeckers have returned to their historic nesting grounds. This was great news since most of the local population of this species left the area over the winter because of the lack of acorns.

While our Birdathon effort was great fun, we were reminded how important it is to protect natural habitats especially in areas subject to intensive development pressure. Bles Park, the Broadlands Wetlands, and Olde Izaak Walton League Pond are all excellent examples of this. In spite of the misguided removal of much of the riparian habitat on the north side of Tuscarora Creek, Old Izaak League Pond is still a viable and easily-visited park to observe and savor nature. Sadly, the natural areas at Bles Park are under threat from plans by Loudoun County Parks and Recreation (PRCS) to put a maintenance yard and allow public access on a service road in some of its prime wild areas. We hope, as the County has done on occasion in the past,  that PRCS will listen to LWC’s suggestions and not destroy an area rich with natural resources.

Shrike Force would like to thank its generous donors for supporting their effort in Loudoun Wildlife’s 2021 Birdathon. The Birdathon is an important fundraiser for LWC and is one of its citizen science tools, helping LWC evaluate the health of our local bird populations and the habitat they need to thrive.  If you haven’t already done so you can sponsor Shrike Force or one of the other teams here.