One Shrub, Many Birds at Blue Ridge Center 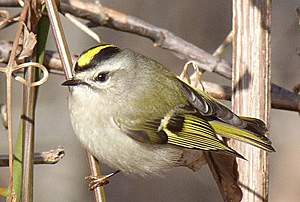 In the early morning hours of November 23, a small group of birders enjoyed some nice sunshine with many sparrows, Cedar Waxwings and a few flocks of American Robins. Gerco Hoogeweg and  Michael Sciortino  led  this month’s regular bird walk at the Blue Ridge Center for Environmental Stewardship.  A single “magic” shrub at the Demory field loop kept producing birds like crazy including at least a dozen Northern Cardinals, many White-throated and Field Sparrows. To our delight we also saw a Fox Sparrow, the first of four that we ended up seeing. A Hermit Thrush was kind enough to show itself and posed on a branch while Yellow-bellied Sapsuckers and Downy Woodpeckers were foraging in the forest. A few Common Ravens were both heard and seen.

Along the Derry Loop we found several active spots that yielded many Dark-eyed Junco’s, a few more Hermit Thrushes, a single Golden-crowned Kinglet, Swamp Sparrows and a lone Eastern Towhee. It was a nice walk in which we saw 34 species.

The complete list of birds seen during the walk can viewed on eBird at https://ebird.org/checklist/S61671630,