Sparrows and a Brown Creeper at Blue Ridge Center

October 26 was a good day for finding sparrows at the Blue Ridge Center for Environmental Stewardship (BRCES) in northwestern Loudoun County. Fourteen birdwatchers, led by Bryan Henson and Allison Gallo, saw a total of 36 species of birds, including five species of sparrows. 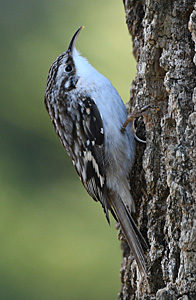 The group took a loop around Demory field, a walk around the visitor center fields and a walk down the entrance road. The fields provided a couple Ruby-crowned Kinglets and good number of sparrows, including Eastern Towhees and Song, Swamp, White-throated and Field Sparrows. We had a quick flyby of a Merlin and enjoyed a flight show from several Common Ravens complete with soundtrack, dives, dips and twists. Cedar waxwings were seen in a few flocks, and we had several flyover flocks of indistinct blackbirds.  The entrance road provided a significant flock containing many chickadees, a couple of Tufted Titmice, and many Yellow-rumped Warblers. On the way back to the parking area, one sharp-eyed observer picked up a first-of-season Brown Creeper.

The complete list for the main walk can be found on eBird at https://ebird.org/checklist/S60946575

A few of us went over to Arnold Lane and picked up five additional species, including Eastern Meadowlarks, a Golden-crowned Kinglet, a couple of Wood Ducks, a Northern Harrier and a Palm Warbler.

The list for Arnold Lane can also be found on eBird at https://ebird.org/checklist/S60946583

The BRCES walk is free and open to everyone. It is held on the 4th Saturday of the month (except in December) and sponsored by Loudoun Wildlife Conservancy.