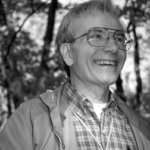 It was with great sadness that we heard of the passing of Dr. Stanwyn G. Shetler from his son, who wrote: “he was a man of many accomplishments who achieved a goal so few are able to claim; he left the world better than he found it.” Stan was a very special person who had a tremendous impact on a lot of people (more than I think any of us realize).

His interest in natural history began with bird-watching in the sixth grade; ornithology was a lifelong avocation. Stan earned his Bachelor’s and Master’s degrees from Cornell University. He went to work at the Department of Botany, National Museum of Natural History of the Smithsonian Institution, in 1962 directly from graduate studies at the University of Michigan, where he  subsequently earned a Ph.D. degree in systematic botany. He spent his whole professional career at the Smithsonian before retiring at the end of 1995. Beginning as an Assistant Curator, he rose to serve as Associate Director and then Deputy Director of the National Museum of Natural History. His publications number well over 100 scientific, technical, and popular titles, including three books and the Annotated Checklist of the Vascular Plants of the Washington-Baltimore Area. His books include the popular Portraits of Nature: Paintings by Robert Bateman (1986) , which accompanied a Smithsonian exhibition by the same title organized by him in 1987.

Dr. Shetler was program director of the international Flora North America Program. The data produced from this project was among the first in the world to document the climatic phenomenon now known as global warming. He served on the board of the Piedmont Environmental Council and the board of directors of the Audubon Naturalist Society, including several years as president. He was a charter member of the Virginia Native Plant Society, and served on the state board of directors as Botany Chair for many years. He taught plant identification courses for the U.S. Department of Agriculture Graduate School off and on since 1963, and in the 1980s and 1990s at Northern Virginia Community College.

Upon retirement, he was appointed Botanist Emeritus by the National Museum of Natural History. In 1995, he received the Paul Bartsch Medal, which is the Audubon Naturalist Society’s top award for contributions to natural history and conservation. In 1988, at the invitation of the Chautauqua Institution, he presented the featured lecture at the celebration of the late Roger Tory Peterson’s 80th birthday. He received the Piedmont Environmental Council’s Individual Award for Contributions to Environmental Improvement in 1981 for his role in drafting a Vegetation Preservation Policy for Loudoun County.

And while doing all that, Stan contributed extensively to the Loudoun Wildlife Conservancy. He gave many programs (I’ll never forget his wonderful and incredibly accurate imitations of warbler songs) and led numerous field trips for us. Those of us who attended these field trips and programs not only learned a lot about the natural world, but were able to share his love of its wonder and diversity.

The boards I was on with him always valued his advice, and when he wasn’t there I frequently quoted him. His gentle, unassuming manner and his vast knowledge of the natural world, people, and nonprofits was invaluable to many of us. He will be sorely missed.