I can remember one 4th of July, walking the W&OD bike trail back from a fireworks display in the evening and being just amazed at the natural light show all around and in the trees. The bike trail was very dark but the firefly display was spectacular. It was far and away more impressive to me than the fireworks we had just witnessed. Nothing represents summer evenings outdoors like the courtship display of the firefly.

Fireflies are actually beetles and while there are about 2000 species worldwide, and twenty or so in the northern Virginia area, the one we are most familiar with is the common eastern firefly or Photinus pyralis. These are the slower, low flying and easy to catch fireflies (or “lightning bugs”) that delight young entomologists in most states east of the Rockies from Maine to Texas. Adults are dark brown and 10 to 14mm long, with three body parts (head, thorax, and abdomen), antennae and six legs. The head has a rounded cover that is dark brown with a yellow edge and two orange spots. They have two pairs of wings; the elytra are the harder outer pair that covers the second pair. The wings are also dark brown with a narrow yellow stripe on the margin. Females have fully formed wings like the males, but rarely fly. The last segment of the abdomen is the part that lights up through bioluminescence with a bright yellow-green flash. The males will begin flying around sunset, low to the ground, and use their flashing signals to attract mates or prey. The females remain on the ground and answer the males with a specific flash of their own. After mating, the female will lay up to 500 eggs in damp soil. Eggs hatch after 4 weeks and the flightless larvae feed on other insects, earthworms and snails. The larval stage lasts one to two years and larvae, or “glow worms” can sometimes be seen glowing on the ground near streams. After pupating underground, the adults emerge in late spring and live for only about 30 days, lighting up our summer nights. 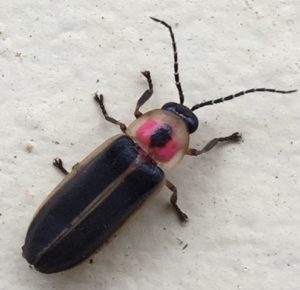 As I was gathering information for this article, a friend told me about a researcher who is studying fireflies in our area. Ariel Firebaugh is a UVA graduate student looking at the effects of artificial light and urbanization on fireflies at UVA’s Blandy Experimental Farm in Boyce, Va. I was lucky enough to have my home property included in her survey and I contacted her about her work. Here is a bit about the survey in her own words: “Fireflies are extremely charismatic insects, but there are many basic questions about firefly diversity and ecology that scientists have not yet been able to answer. Exactly how many firefly species are there? Are firefly populations declining, increasing, or holding steady? What role, if any, does land use changes such as urbanization play in shaping firefly distributions and abundances? The field data needed to address these questions is surprisingly sparse. My project seeks to survey the distribution, abundances, and diversity of fireflies across much of Virginia in response to concerns that fireflies are becoming less common in the region. For logistical reasons, I’ve chosen to focus my efforts this summer on the areas in and around five cities in Virginia: Winchester, Leesburg, Charlottesville, Richmond, and Roanoke. A number of volunteers in each city have generously allowed me to come survey fireflies in their backyards, so just about every night during June and July, I’ll be excited to have the opportunity to meet new people and observe local firefly communities. I hope the project will shed light on how fireflies in Virginia may be affected by landscape-level changes associated with urbanization. “

Even if you are not involved in Ariel Firebaugh’s survey, you can still get involved and help monitor the populations of fireflies in our area by participating in

citizen science projects such as Firefly Watch, which is affiliated with the Boston Museum of Science. They have an open call for volunteers to monitor firefly populations around their homes. The protocol is easy to follow and takes just a few minutes each week to complete. To visit their website, click here.

Whether surveying for science or just enjoying the magic of this summer phenomenon, take some time to observe and appreciate the amazing fleeting beauty of the fireflies.