The Red Foxes of Loudoun County 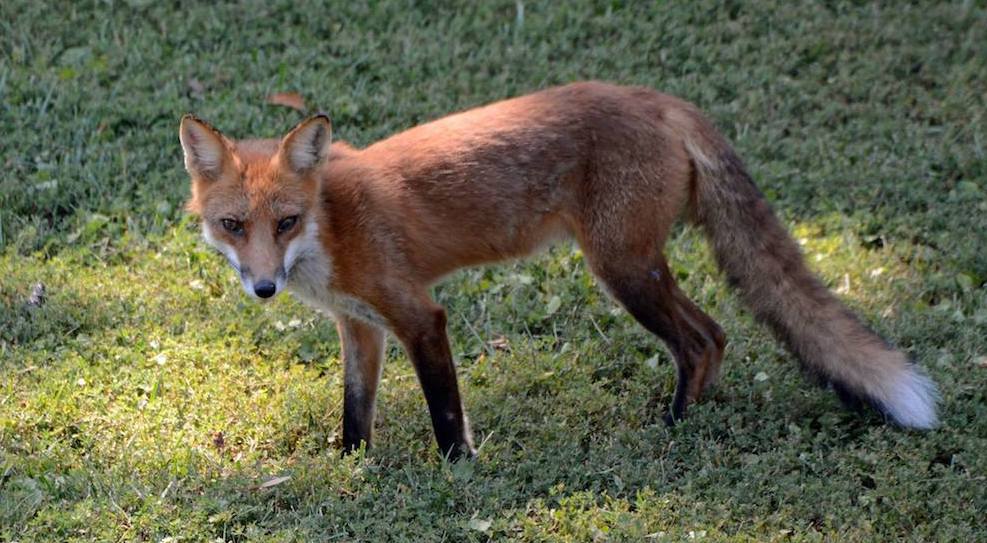 By John Griffin, Director, Urban Wildlife for The Humane Society of the United States

Many articles about the red fox begin by introducing readers to the fact that they are the most widely distributed of any wild carnivore, and this is certainly true, as they occupy habitats that range from deserts to arctic tundra. That being said, perhaps the most interesting thing about red foxes, particularly in places like Loudoun County, is that their successful population expansion is inextricably linked with the region’s history and the way that humans have used the land. In fact, red fox populations have been influenced dramatically by how the landscape was shaped over time, and that influence persists as rapid urbanization, a trend that is only increasing in Loudoun County, continues largely unabated.

When Loudoun County was settled by early colonists, red foxes were reportedly absent from most of the area, as they were from much of the East Coast. Red foxes did not become common until the mid-1800s as hardwood forests were converted to farmlands. Gray foxes would have been more prevalent because of their preference for the thick woodland habitats that dominated eastern North America prior to the expansive clearing and land use changes that took place over the past 200 years. Gray foxes, our other native fox, can be found in Loudoun County and the State of Virginia currently, but the red fox has competitive interactions with the gray fox and will tend to push them out of red fox territory. The population of red foxes in Loudoun is estimated to be between 700 and 1,000, and they are considered to be abundant in most counties, including Loudoun.

Gray foxes (Urocyon cineroargentus) are smaller than red foxes and have a visibly shorter snout and legs, a gray body, and a black tip at the top of the tail compared to the typical white tip on the red fox tail – a common way to identify a red fox. Red foxes (Vulpes vulpes) typically have a reddish-brown coat and belly fur that ranges from white to gray. Their paws and the back of their ears are typically a distinctive black, but there can be some slight variation in colors and markings. An important behavioral distinction between the two that may help with identification is that gray foxes can climb trees, even using them to escape a pursuing red fox as that is a feat the red fox cannot manage. 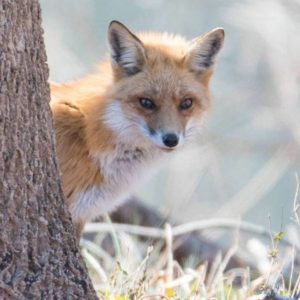 Early settlers released red foxes, translocated from Europe, all along the eastern seaboard to hunt as early as the mid-1600s. These translocations and so-called restockings were meant to increase the quality of furs for trapping as well as provide fox hunting opportunities, and they continued episodically up until the 1800s. It is interesting to note that the history of the mounted fox hunt, a tradition brought over from Europe (along with the European foxes), hints at the changes that have occurred in our region. Fox hunting has existed in America and in Loudoun County since Colonial days, but changing demographics, rampant urbanization and changes in both land ownership and use have caused once exclusive Fox Hunt clubs to open up to all. And not only are the pursuers of the foxes making some adjustments to the traditional hunt, but the foxes themselves are changing their habits when pursued. Participants have noted that the foxes sometimes travel shorter distances when chased – a behavior which may be due to increased population density – and will often take refuge in the now-abundant human-built structures which brings the chase to an abrupt end. This anecdotal information syncs up with what we know of red fox behavior in urban areas. Red foxes are territorial, actively defending their ranges from interlopers, and as areas become more urbanized the smaller fox home ranges become, increasing overall population density.

Although the red fox originally migrated from Europe to North America during the Ice Ages, there is a complex history of man tinkering with native populations of red fox through extensive European translocations and dramatic large-scale habitat changes. When these factors are combined with a confusing and somewhat shrouded taxonomic history, they lead to a contentious and long-debated question: Did modern red fox populations in eastern North America originate from natural range expansion or through translocations of European foxes? This debate may finally be resolving. A 2012 paper in the Journal of Mammalogy attempts to answer that very question and it details researchers’ results when they compared DNA sequences of red foxes from the east and lowland southeast considered to have arisen from intentionally translocated foxes to the DNA sequences of North American native foxes. This paper’s findings suggest that most of the red foxes that we see and appreciate in Loudoun County today are native and originated in North America, having expanded from populations of native red fox in the Northeast. Although the foxes would give not a whit regarding any taxonomic twists we get into about them, it is important and worthwhile to clarify this issue because it can impact the way we think about them and that can lead to how we protect them, especially when we find them living under our very noses – under our porch or shed.

Red foxes can exploit marginally supportive urban habitats, including the places around our homes or businesses, not only because of an abundance of associated food, but because they are equipped with incredibly sharp senses, and a cunning intelligence. Keen hearing, sharp vision, and an excellent sense of smell combine to enable them to sense a rodent over 100 feet way. Another factor is their diet itself – as omnivores the list is extensive. They consume all manner of invertebrates, amphibians, reptiles, fruits, berries, vegetation, small birds and small mammals, shifting their diet on a seasonal basis depending on availability.

Though other animals like coyotes occasionally kill red foxes, it should come as no surprise that a canid species able to thrive within the margins of our human communities would also suffer the most mortality from man. Cars are the principal cause of death followed by the hunting and trapping of red foxes as furbearers and shooting and trapping to reduce nuisance complaints, a particularly ineffective way to resolve conflicts with foxes, or any carnivore for that matter. Another issue and growing cause of concern for red foxes is Sarcoptic Mange. These infections lead to a slow and agonizing death and recent research is pointing to the overuse of rodenticides in urban areas. The foxes become compromised when they consume a rodent that has ingested rodenticide and are more susceptible to the mange mite because of a depressed or otherwise impacted immune system. And for certain this is a source of the annual cases of a wraith-like red fox menacing the community and invariably captured on camera and sensationalized by the local news.

Even though our knowledge of red fox basic ecology and interaction with the urban environment is greater than for any other species of wild carnivore, the public still has a considerable lack of awareness and understanding about their behavior and how to live with them. That presents a problem and challenge for not only the red fox, but for the people that care about and appreciate them. Depending on the situation and the frame of reference they can be easily and undeservedly categorized as a nuisance, or even a threat. And so often the public’s inability to understand this clever canine is due to the misinterpretation of fox behavior – they can seem bold and seemingly incautious, even comfortable around humans – the direct gaze and confidence causing consternation on the part of humans who misperceive the bearing and proximity for aggressiveness. So we must endeavor to advocate and work within the community to foster an appreciation of them and help others to better understand one of our most regal and long standing wild neighbors. As our neighborhoods and communities continue to grow and expand and remain attractive to red foxes, helping to spread the message about this incredible wild carnivore is key to neighborly relations in the future.