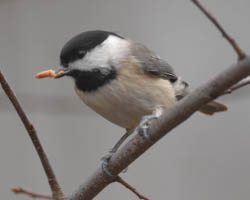 Chickadees are one of the most charismatic birds that come to backyard feeders. A chickadee will announce its presence as it noisily swoops in and grabs a seed. It will then take the seed away to eat at its leisure away from other birds. The vast majority of chickadees that are found in Loudoun County are Carolina Chickadees. There are Black-capped Chickadees in the western part of Virginia, but unless you really know how to tell the two species apart, it is safe to consider all of the chickadees you see in our region to be Carolina Chickadees.

Chickadees seem to be constantly making noise. They are named for the “chika-dee-dee” call that they often make. However, chickadees have a wide variety of vocalizations. In a way, these birds have their own language. For example, the more “dees” that you hear from a chickadee, the more threatened the bird feels. There is also a special call that chickadees make indicating the presence of an aerial predator such as a hawk or falcon.

Since these birds are especially active and alert, they often act as lookouts for mixed flocks of other birds in the fall and winter. Migrating or wintering birds will join up with chickadees because they know that they will be better protected. Listening for chickadees is a good way to find migrating warblers in the fall. Since chickadees are cavity nesters, they will sometimes be found nesting in bluebird boxes. They are usually early nesters and will build their nests out of moss and plant fibers. Chickadees are omnivores and eat both seeds and insects. In the winter, about half their diet consists of seeds, but in other seasons their diet is heavier on insects and spiders.

To learn more about these fascinating birds, you can go to the Cornell Lab of Ornithology’s website, All About Birds (www.allaboutbirds.org).