Where Are Our Wonderful Insects?

I am sure you have wondered every winter: Where do all of the wonderful insects go when winter comes calling in Virginia? Do they hibernate, migrate or die? Well, they do all of these things!

Insects are ectothermic meaning they are cold-blooded animals and must rely on outside sources to warm their bodies. Insects have varying ways of coping with the dropping temperatures. Most seek some kind of shelter during the winter months to help them tolerate freezing temperatures or avoid freezing altogether. 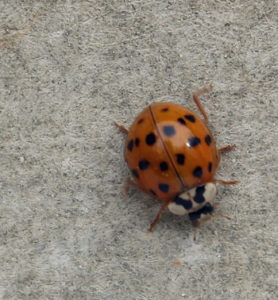 Insects can overwinter in various stages. Some moths will lay eggs in tight bunches; the moths will then die and the caterpillars will emerge in the spring. Tent caterpillars and gypsy moths are good examples of this. Some insects will overwinter as a larva. An example of a larva that overwinters is the woolly bear. It will usually seek shelter in leaf litter. Grubs or beetle larvae can overwinter by going deeper into the ground. Nymphs of dragonflies, mayflies and other aquatic insects live in ponds and streams throughout the winter, and will emerge as adults in the spring. Many moths will overwinter as a pupa in leaf litter or attached to twigs. Adult wasps will often seek shelter in the eaves and attics of houses in late fall as temperatures drop. Tree cavities are another common overwintering spot especially for the mourning cloak butterfly, which is one of the first butterfly species to emerge in the spring. Honey bees survive by producing body heat using stored honey and by fanning their wings to move the heat around the hive.

Other insects, like the Asian lady beetle aka ladybug you see on any given day, will seek shelter in your house. This beetle was introduced in the 1960s to help control agricultural pests. Another Asian insect that likes to be inside your house in the winter is the brown marmorated stink bug which happens to be an invasive species and quite a nuisance. Box elder bugs also like to come inside.

The insects that stay outside have an interesting ability to stay alive by having built-in antifreeze. As the weather gets colder, the composition of their blood changes so it does not freeze. This is known as diapause. If you have ever looked under the bark of a rotting log or explored further into the middle of the log itself, you will find some overwintering insects like wasps, bees and beetles. This is especially fun to do on a sunny day in the spring. They will be frozen in place and as they start to warm up, you will see them start to wake up.

Some insects will avoid the cold weather by migrating. A good example of an insect that migrates is the monarch butterfly. The monarchs that we see in Virginia will migrate all the way to Mexico to overwinter in warmer temperatures. Some insect pests also migrate from one area to another according to when crops are planted.

So what happens to the pesky mosquito? Why are they so quick to appear and suck your blood on the first warm day? The female mosquitoes mate with males in the fall, and the males then die off. The females overwinter as adults by hiding in hollow logs or similarly-protected spots. As winter ends, and the females come out of winter dormancy, they need your blood to nourish the eggs inside them.

Some insects will die as winter approaches, but what they leave behind will emerge in the spring to carry on the life cycle. Praying mantises, for example, die in the fall, but before they do, females produce eggs that are laid in a frothy secretion. This secretion will harden to protect the eggs from winter temperatures and will turn brown. You can find these brown egg cases attached to twigs, leaves, fences, etc. The young mantises will emerge from the cases in the spring as the weather gets warmer.

So much is still unknown about how the vast majority of insects survive the winter. They are truly amazing creatures.