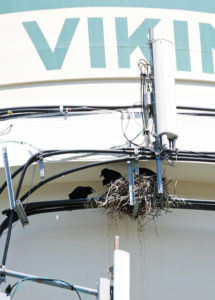 While on a walk with students from one of my environmental science classes on a winter day in 2013, I heard loud, raucous and guttural “rawk, rawk!” calls coming from the Purcellville water tower. “Do you hear that? Those are ravens!” I explained to my students that a raven is much larger than a crow, has a thicker bill and a wedge-shaped tail, compared to the crow’s square tail. They also have the ability to soar, something crows are unable to do. Lesson over – or so I thought – and my class continued on.

The next morning I saw one of the ravens fly with a stick in its bill toward the top of the tower. After taking a rest on one of the armatures 200 feet above the ground, it hopped over to a set of thick cables and placed the stick next to a cable support and flew off again. I couldn’t believe it! Were ravens building a nest on the tower? Ravens typically nest on cliffs or in trees in the wild, not in a town surrounded by humans! I watched the raven bring another five sticks, each about 1 to 2 feet long, and add them to the growing nest. This was only the beginning of what would become a very memorable two-year lesson for those of us fortunate enough to witness it. 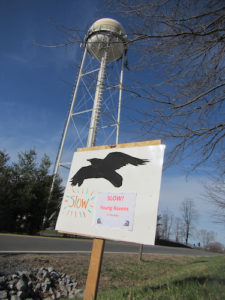 The ravens’ first nesting attempt in 2013 was a roller coaster of emotions as we joyfully celebrated when we realized the female was incubating eggs but then were equally anguished when telecommunication workers disturbed incubation during repair work. Then there was heartbreaking sadness as we lost young ravens, one by one, during the dangerous time after fledging the nest. By the time school let out for the summer, only one young raven remained. This one, however, must have represented success to the parents, for they returned to nest in this same location again the next winter.

During their second nesting attempt in 2014, the community rallied to give the water tower ravens their best chance of successfully raising their young. The town helped make sure there were no workers on the tower to disturb them. Loudoun Valley High School students posted signs to make people aware of the ravens and to be cautious while driving by the nesting site. The students even named the pair in honor of two of the town’s founders: Stacey and James. In their second year, Stacey and James successfully fledged all three of their young!