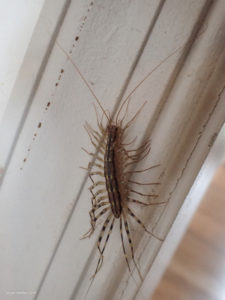 Raising an entomologist provided our family with many interesting encounters with the natural world. One such memory involves a house centipede that had been confined to a jar for closer inspection. While it waited in the glassy jail, my daughter came across a large wolf spider which got scooped up and added to the jar. As she headed off to other activities that morning I thought that the smaller house centipede would surely be devoured by the spider. Imagine our surprise when we returned to find the house centipede looking fat and satisfied surrounded by the leftover legs of the spider. These creatures deserve a closer inspection indeed!

House centipedes (Scutigera coleoptrata) are elongated, thin arthropods that belong to the class Chilopoda. They are yellowish-brown in color, have 15 pairs of long legs (one pair for each body segment), long antennae, and well developed, multifaceted eyes. They originated in the Mediterranean, but have increased their distribution throughout the U.S., Canada, Mexico and South America. They were first documented in Pennsylvania in 1849. Although they cannot survive outdoors in the winter in our area, they find many places in our homes to stay warm. They hide in damp and dark areas like crawlspaces and basements. They have been known to live for several years and females can produce up to 150 offspring. There are six larval instars or molts and four post larval instars before the centipede reaches maturity.

House centipedes are secretive and quick, coming out at night to prey on other arthropods, such as cockroaches, silverfish, spiders and carpet beetles. They subdue their prey by injecting venom with their strong jaws. While they are aggressive predators, they do not readily bite humans and are not considered dangerous. In fact they can be considered beneficial because they prey on arthropods that we would rather not have in our homes. An over abundance of house centipedes may be an indicator of an infestation of carpet beetles or other pests. Their numbers are best controlled by removing their food source.

So if the house centipede’s lightning speed and striking appearance have put fear in your heart up to now, consider its good side, and let it be… this harmless predator is helping to keep your home free of unwanted pests.