Giving Thanks for Ravens 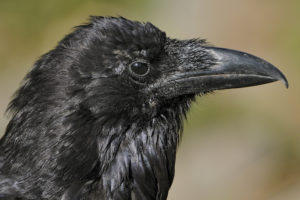 Common Ravens (Corvus corax) belong to the family of birds known as corvids, a group that includes the smartest birds on the planet: the jays, jackdaws, rooks, and crows. Experimental studies have shown ravens have the cognitive abilities of a 4-year-old child, which makes them equally or even more intelligent than dogs and most monkeys. It is their intelligence, and the resulting antics, that capture our hearts and attention. Ravens can be amicable, joyful, fun-loving and extremely curious. This combination also can make them a nuisance. Ravens, like their clever cousins the crow, have the ability to analyze situations and draw meaningful connections. They are skilled problem solvers.

At one time, Common Ravens nested throughout the Appalachian Mountains from Georgia to Maine. Their numbers steadily declined as pioneers made headway to the mountains and crows and ravens were shot as vermin. The greatest reduction in their population came in the late 19th and early 20th centuries when timber barons seeking profits denuded entire mountain ranges, destroying complete ecosystems and leaving ravens without a place to live. Poisons, continued habitat loss and changing agricultural practices did the rest – raven populations plummeted. Since 1978, Common Ravens have been protected by the Federal Migratory Bird Treaty Act which protects birds as well as their nests. Today, ravens are listed as endangered species in several eastern states and a species of concern in most of the others.

Historically, humans have felt a bond with ravens which is revealed in legend, poetry and literature (Shakespeare, for example). Ravens have been known as messengers between life and death and considered bad omens as well as symbols of good luck. They play an important part in the mythology of many cultures. Native American tribes such as the Tlingit and the Haida refer to the raven as the trickster whose role is often to both deceive and help man and his fellow creatures. 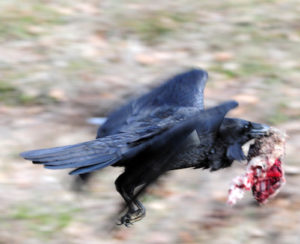 To a raven, there is nothing more tempting than a trash bag set out on the curb. Within minutes of being placed on the ground, ravens (or their cousin the crow) will arrive and toss trash out of tears they make as they seek the treats we throw away. Unfortunately, most homeowners don’t embrace the mental prowess and resourcefulness of ravens, and object to the mess they have to clean up. If homeowners appreciated the intelligence of the raven, however, they would understand using a trash can with a tight-fitting lid is a simple solution. Of course, ravens that successfully obtain food by pilfering are only encouraged to seek bolder adventures. This has led to ravens learning to jump into open, parked cars to steal shiny objects or food left sitting on a seat, as well as ravens diving into open trash cans and dumpsters. At our high school, the ravens sit nearly every day on the lip of the roof over the food courtyard waiting in anticipation for last lunch to be over so they can raid the courtyard for leftovers.

Being opportunist omnivores, ravens eat a wide variety of foods. They will follow coyotes or wolves to a kill to scavenge carrion. There is even evidence of ravens leading wolves to prey in order to get the leftovers and of ravens calling to other ravens to alert them to available food. Ravens can also recognize predators and will warn each other of their presence.

Raven intelligence makes them highly skilled predators. Bird eggs are favorites and ravens are known to tag-team ducks and geese to steal their eggs. One of the pair will approach a duck at the nest, causing the duck to confront the intruder. The lead raven will draw the duck away which allows the second raven to raid the nest. Young songbirds are also favorites, but ravens dine on adults as well. I once witnessed a raven flying after what I thought was a leaf in the wind, but it turned out to be a Brown Thrasher fleeing for its life. It dashed across the sky and dove into a thicket that it must have thought would offer protection. The raven simply dove in after it and captured the thrasher in its beak. Perhaps the raven had young of its own to feed and one animal life allowed another to live. Mother Nature’s gifts are all precious, but she does not choose sides or make judgments.

When meat is not on the plate, ravens eat a variety of plant matter, fungi and seeds. Acorns, when in season, make a fine main course by providing calories in the form of oils, fats and sugars. In fact, corvids are one of the main distributors of acorns in the forest. Ravens, crows and blue jays all cache acorns in numbers far greater than squirrels. Undoubtedly, some of these acorns are forgotten and sprout into new trees. How many oaks grace our forests thanks to a raven? 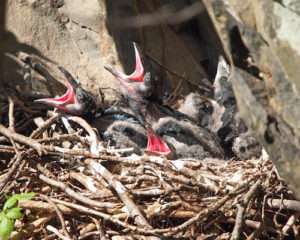 Ravens show diverse taste in selecting nesting sites as well. In the eastern United States, cliffs and trees are the favored choices. In western states, cliffs are a preferred location, but ravens are also observed nesting on structures such as billboards, wooden transmission poles, bridges, and even city rooftops. Ravens build large stick nests lined with fur obtained from dead deer or rabbits. Nest building begins early, from about mid- to late-January, and takes a week to 10 days to complete. By mid-February, when winter weather is at its worst, females are sitting on a clutch of 3 to 7 eggs. Incubation is shared by both male and female ravens and is surprisingly short, lasting only 18 to 24 days. The young are born helpless and naked with closed eyes. Young ravens become fully feathered after 35 to 40 days and are ready to leave the nest at that time. Fledging the nest is the most dangerous time for the young ravens (and all birds) and many young will not survive their first week out of the nest. Young ravens rely on their parents for 4 to 6 weeks before they have the skills to survive on their own. During this time, they develop their flying skills and learn about their world, oftentimes through play.

Gregarious, vocal (ravens have a huge vocabulary) and fun-loving ravens will play for hours. On the ridgetops of western Loudoun County, one can see as many as 20 to 30 young ravens in the sky at one time, especially on windy days, in full frolic. Chase seems to be the main form of play and includes amazing aerobatics involving 360 degree roll-overs, arcing dives and even flying upside down. Sometimes a lead raven will simply fall from the sky for 100 feet or more before regaining its wings and charging back into action. Add a hawk or eagle into the picture and euphoric bedlam erupts. Surprisingly, many of the raptors seem to enjoy the play as well, particularly the immature ones. Juvenile Red-tailed Hawks will power-dive out of the sky toward a lone raven or even a group of ravens only to pull off at the last second, a signal for the ravens to get involved. Soon dogfights are taking place all over the sky as ravens chase red-tails and red-tails chase ravens, their mock aerial combat utilizing barrel rolls and loop-de-loops. When a Bald Eagle gets into the mix, nothing is held back! For their size, Bald Eagles are amazingly adroit fliers, and they provide ravens with an unsurpassed level of play. Bald Eagles easily dominate ravens in aerial ability and could snatch a raven out of the sky at any time. Instead, they choose to play the game, much to a raven’s delight. To witness the aerial displays of these two iconic birds reminds us of the sheer joy, beauty, majesty and passion inherent in nature.

Ravens typically favor living in wild places but are learning to take advantage of the opportunities humans provide. Whether we consider them tricksters or messengers from another world, we can learn from them by observing their resourcefulness, intelligence and playful nature. So go forth and seek ravens, and give thanks for all they represent!

Heinrich, Bernd. Mind of the Raven: Investigations and Adventures with Wolf-Birds. Harper Collins, 1999.