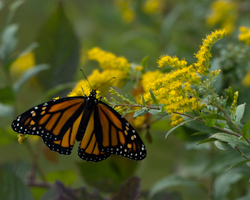 On one of those glorious and uncharacteristically cool mornings this past August, I took a walk and noticed some of the first blooms of goldenrod. I was first struck by their beauty and then intrigued by the many species of insects that were busily flying about and visiting this late summer and fall bloom. It was literally buzzing with life and reminded me why it remains one of my favorites. It even enjoys space in my home flowering borders. While often mistaken for ragweed (because they share blooming time) and blamed for seasonal allergies, this attractive and useful fall bloom is not making you sneeze.

You will recognize goldenrod by its tall upright growing habit, and its bright yellow flowers that bloom in late summer and fall. The flowers are small (about one-quarter inch) and bloom in elongated clusters atop the three to seven foot stems with alternate leaves that are elongated and smooth. The pollen produced within these flowers is heavy and not easily airborne – thus, not a suspect in seasonal allergies.

There are as many as 130 species of goldenrod in the United States. It spreads by both rhizome and seed, with seeds dispersed in the late fall. Because it blooms from late July through October in our area when there can be a dearth of nectar, goldenrod is an important food source for honeybees and native bee species, as well as wasps and butterflies. White-tailed deer will graze on goldenrod when it flowers and both cattle and sheep will find it palatable enough to eat if growing in pastures.

The name Solidago means “to make whole” and goldenrod has a long history of medicinal uses. Native Americans used the root as first aid for burns and made a tea from the flowers to ease fevers and snakebites. Flowers were chewed to sooth sore throats. While it has not been extensively studied, goldenrod may act as a diuretic, helping to flush excess fluids from the body. It is used in Europe to help prevent kidney stones and to treat urinary tract inflammation.

Goldenrod’s importance in the survival of Monarch butterflies cannot be overstated. It blooms during a season when many flowering plants are winding down at the end of their life cycle. A field of goldenrod is an important refueling stop for Monarchs on their journey south; a great nectar source. There is also evidence Monarchs utilize Phyrrolizidine alkaloids found in goldenrod and asters, which are toxic to mammals, and may provide protection from predation.

A few years ago I was taking a beekeeping class when the instructor showed a photo of a huge field of blooming goldenrod. There was an audible groan of complaint from the class as people mistook the goldenrod for ragweed. I was amazed and have made an effort since then to spread the word. So pass it on…do yourself and many important insect species a favor and make space in your yard for goldenrod. You will not be sorry