Eek, it’s a mouse…or wait, is it a vole or a mole? Hmm, perhaps it’s a shrew? For many people, the difference does not matter. These small, rodent-like animals are often thought of as creepy pests that should be avoided, or better yet, exterminated. To this end, American homeowners spend more than $100 million dollars a year to rid themselves of these essential animals. Further, in the quest to eliminate them, homeowners also kill other wildlife through secondary poisoning. And while it’s true that mice, particularly house mice (Mus musculus), can be unhygienic and may cause some home damage, moles, voles and shrews are typically harmless and play a vital role in the ecology of field and forest. They are central cogs in the cycle of life, and without them, ecosystems would collapse. By recognizing them and understanding their natural history, people can find ways of living with them or providing nonlethal means of discouraging them from our yards and gardens.

So what is the difference between these animals? Unlike voles, moles and shrews are not rodents. Moles and shrews belong to the order Insectivore, a group of small mammals including bats, which consume invertebrates such as insects, insect grubs (especially Japanese beetle grubs), worms, snails, slugs, spiders and other small animals. Like squirrels, woodchucks and beavers, voles are true rodents. They have gnawing incisors that continue to grow during their lifetime. Only by gnawing do the teeth stay trimmed. 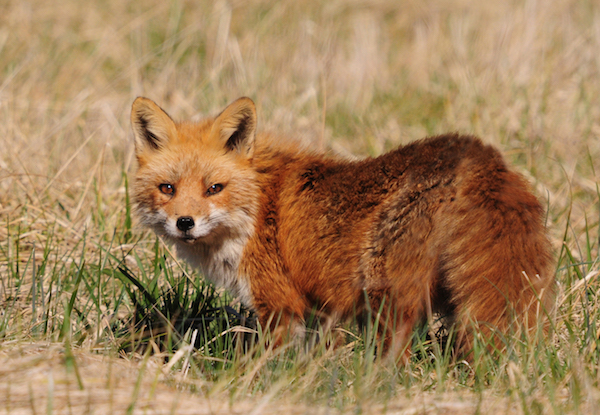 While moles, voles and shrews superficially look similar with their short gray hair, moles tend to be much larger, often up to 6 to 8 inches in length. Due to a mole’s muscular shoulders, it appears much thicker in circumference than a shrew or vole. There are two species of mole in our area, the Eastern Mole (Scalopus aquaticus) and the Starnosed Mole (Condylura cristata). All moles have high metabolisms and must eat nearly their own weight in food every day. To survive they must root through a lot of ground hunting for their prey. Under proper conditions, moles may tunnel more than 100 feet a day in their unending quest for food.

Moles are easy to identify because they have huge paddle-like front feet that are an adaptation for digging and living a fossorial, or burrowing, lifestyle. Because the great majority of a mole’s life is spent underground, it has small rudimentary eyes and is nearly blind. They have no visible signs of ears. As they have no need to climb, moles lack a long tail, which provides balance, but instead have a short tail that is about a quarter of their body length.

The Eastern Mole is the more common of the two moles of our area, and although rarely seen, evidence of its tunneling is easy to spot. The other mole in our area, the Star-nosed Mole, is a bizarre looking creature with 22 pink fleshy tentacles on the end of its snout that superficially resemble a star. This unique appendage is highly sensitive to the presence of insect larva and other invertebrates in the ground and helps them forage. Star-nosed Moles frequent wet meadow and streamside habitats and are therefore are not often noticed or encountered. Of all the mole species, Star-nosed Moles tend to be the most gregarious, forming small social groups where they reside.

Surprisingly, moles are not usually destructive of plant matter but may inadvertently damage flower bulbs as they are pushed aside in their quest for insects. Some people find their raised tunnels to be unsightly, while others view them as an encouraging sign. While tunnels may speak of an infestation of insect grubs in the grass roots of the lawn, they also indicate moles are attacking the problem and benefitting the lawn. In addition, mole-made tunnels aerate the soil and turn it over, making it healthier for the plants above. Nutrients are added in the form of their droppings, further benefiting the lawn. It is better to sustain a small amount of plant damage from moles seeking prey than to spread some type of granulated insecticide on the lawn to kill grubs and whatever else may fall victim to the poison.

Homeowners who are unfamiliar with a mole’s life history may buy steel traps that skewer them in the ground. These traps ought to be avoided because of the harm they can cause careless users and the simple fact that they don’t work. Tunnels are made when moles hunt for worms and grubs and are a onetime occurrence – moles rarely frequent surface tunnels more than once. Therefore, traps laid on existing tunnels will not be visited by moles again.

The use of poisons to kill moles is far worse. Although labels suggest that when properly used baits are safe for wildlife, the opposite is true. Because moles seek out live food, they will not readily eat poisoned baits. Instead, other animals will discover and eat them, resulting in secondary poisoning. Non-targeted species – such as deer mice, chipmunks, skunks, opossums, raccoons, and even dogs and cats – can find and eat the bait. Each year baited poisons inadvertently kill thousands of house pets. Furthering the damage, poisoned moles and other small animals that have taken the bait will stagger about before dying. Their erratic behavior attracts the attention of predators like hawks, owls, skunks and foxes, which will in turn also die from eating the sickened animals. The best solution is to leave moles alone. They will quickly move on to greener pasture, so to speak, in their neverending quest for food. Soon, you’ll forget they were ever in your yard. 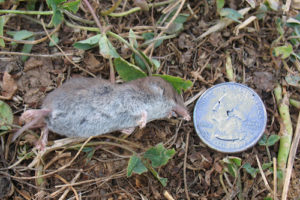 Shrews are very small, hyper-active insectivores related to moles. They are active both day and night in a tireless effort to eat and sustain the demands of an even higher metabolism than moles. To this end, they will, and do, consume anything they can overcome. Spiders, crickets, worms and other invertebrates make up the bulk of their diet, but they have been known to kill prey larger than themselves, such as small snakes and mice. Shrews are much smaller than moles –only about 3 or 4 inches in length. Because shrews do not live a fossorial lifestyle, they lack the large paddle-like feet of moles. However, like moles, they have elongated heads, slender snouts and pointy noses. Their ears are diminutive and may or may not be visible depending on the species.

Most shrews have strong scent glands which they use to identify territory, attract mates and deter predators. Oddly enough, some shrews, such as the short-tailed shrew, have poisonous bites that help them to subdue prey. The bite, however, does not harm humans, other than some slight discomfort from the bite itself.

Shrews hunt beneath the leaf litter of the forest floor or in grassy areas often using the runs and burrows of voles and occasionally moles. Shrews are rarely seen alive, but they are sometimes encountered dead on a forested path, or more likely, when brought to a house by a family cat. (Click here for more on cats outdoors.) Occasionally, people may hear the high-pitch squeals of shrews emanating from leaf litter when two shrews encounter each other or when a dog spots one while sniffing in leaf litter.

Loudoun County hosts six species of shrews that all pretty much look the same. It takes an expert to tell them apart via the dentition of their jaw and pelage of their fur. While some shrews are generalists, others are adapted to specific habitats. The Northern Short-tailed Shrew (Blarina brevicauda) is one of our largest shrews at nearly 5 inches in length. They live in a variety of habitats from forests to fields and are widespread. Northern Short-tailed Shrews, along with another common county shrew, the Least Shrew (Cryptotis parva), are major sources of food for a variety of predators including snakes, owls, hawks, weasels and foxes. The most intriguing shrew in our area is the Pygmy Shrew (Sorex hoyi) which has the distinction of being the smallest mammal in North America. Weighing in at 2 to 4 grams, this shrew weighs roughly that of a dime. Three other shrews found in the county are the Masked, Smokey and Southeastern Shrews. 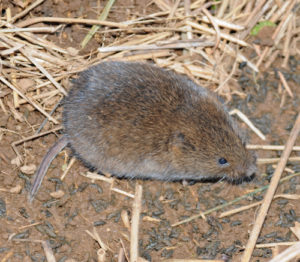 Voles are small mouse-like mammals characterized by short, thick bodies with small ears and stubby faces. Their short tails are in character with living a ground existence. Most are semi-fossorial, meaning they live on or beneath the ground. They do not climb and do not enter homes or barns. Being herbivorous, voles forage for plant material, such as grass stems and forbs in grasses, fields and meadows. To see their runs, along with their grass cuttings, the seeker needs only to get down to their level. A few species, such as the Woodland Vole (Microtus pinetorum) of western Loudoun, make tunnels beneath the forest floor and feed on roots, tubers and mushrooms.

The Meadow Vole (Microtus pennsylvannicus), also known as the field mouse, is perhaps the best known vole in North America. They inhabit every grassy meadow and field from the mid-Atlantic well into parts of Canada. An easy way to find a Meadow Vole is to look under any large board or object resting on the ground in a grassy field. Oftentimes, two or three voles will run about beneath the board startled by the sudden invasion of sunlight.

It’s important to recognize that Meadow Voles are the most highly prolific mammals in the world. Under ideal cyclic conditions, Meadow Voles can reach populations in the thousands per acre although 20 to 100 Meadow Voles per acre is more common. Every few years when these high concentrations occur, they draw in predators from near and far, especially raptors. Several years ago there was a huge population explosion of Meadow Voles in the fallow fields along Montressor Road, north of Leesburg. That winter saw a rare confluence of Rough-legged Hawks, Short-eared Owls, Northern Harriers, as well as Red-shouldered and Red-tailed Hawks coursing the fields and taking advantage of the bounty. It was an awesome spectacle, and as word got out, there were often more birders parked along the sides of the roads than there were raptors in the fields. 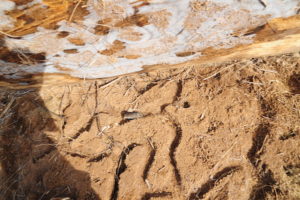 Meadow vole under a board
Photo by Liam McGranahan

Unfortunately, when large vole numbers like this occur in agricultural areas, voles will begin eating crops and girdling the bark off of fruit trees. Under these conditions, farmers often resort to rodenticides to decrease their crop losses. This results in the unintended loss of other wildlife through secondary poisoning. Increasingly, however, more farmers are striving for safer alternatives and are using a variety of integrated pest management practices to protect their livelihood.

These small mammals – moles, voles and shrews – make all the difference in the natural world and play a critical role in their ecosystems. They improve soil conditions by providing aeration and fertilization services. They are a vital source of food for other animals. However, their existence relies on people’s understanding of their needs and required habitats. Rather than being frightened or annoyed by their presence, embrace it and their thread in the fabric of life.