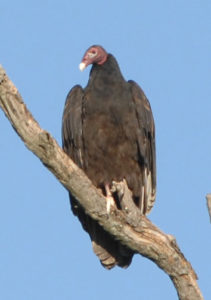 The sight of a Turkey Vulture (Cathartes aura) is a common occurrence here in Loudoun County. We see them soar gracefully overhead, the untrained eye often mistaking them for hawks or eagles, their 5 to 6 foot wingspan making them appear regal and dignified as they gently circle above. We also see them grouped in dead trees, wings spread wide like large, black bats in what is called “horaltic pose.” Sometimes they are hunched over a deer carcass on the roadside, ripping and tearing flesh as they fight for a prime spot to dine. What a dichotomy … which is exactly what the perception and reality of the Turkey Vulture really is.

Turkey Vultures have a bad rap, which is really a shame, as they are quite misunderstood. Not only do these birds perform a tremendous service to the human population, but they also are a very polite, considerate society.

No one can deny that the Turkey Vulture certainly wouldn’t win any beauty contests. However, their looks have a purpose. The red, featherless head enables the bird to eat deep into the carcass of a deceased animal while remaining free of debris. Vultures prefer this, as they are scrupulously clean by nature. And, those beady black eyes have incredibly sharp eyesight, enabling them to find a meal when their keen sense of smell misses the mark.

Non-confrontational and unaggressive, Turkey Vultures do not stalk, hunt or track live prey except in cases where a small mammal is injured, sick or weak – and this happens only on very rare occasion. Despite the fact they eat dead animals, vultures are picky eaters and prefer fresh kills. However, when decayed meat is the only option, it’s no problem for the vulture’s highly acidic digestive system which virtually sterilizes everything it ingests. This avian sanitation engineer prevents the spread of diseases such as anthrax, salmonella, botulism and other bacteria that spread via groundwater or through the air.

Social by nature, vultures are almost always in groups, which are referred to as a “venue” while on the ground and a “kettle” when airborne because their circling is reminiscent of the bubbles rising to the top of a pot of boiling water. They often roost together in large groups and in the same spot each night. Sometimes they will claim a specific branch within their tree and will frequently return to the same roost for many generations. When gathered around a carcass, we may interpret their behavior as aggressive and frenetic as they appear to fight over their meal. In reality, they are very considerate of each other. Only one vulture is allowed to “dine” at a time, and only when another member of the venue attempts to “cut in line” will the others hiss or grunt. To humans, these guttural sounds contribute to the negative view of vultures, but it’s not their fault. Due to the lack of a syrinx (the vocal organ of birds), they are relatively silent with limited vocal ability.

Paired couples are monogamous and mate for life. They usually nest on the ground, and raise only one brood per year. Both parents share responsibility for the incubation and, later, the feeding of their young, working together as a pair and as contributing members of their society.

By now I’m sure you’re a full-fledged vulture fan, but just in case you need more convincing that the vulture is a good guy, here are some other cool facts you may not know: