Lola, the Monarch with the Injured Wing

by Mona Miller, aka “the Butterfly Lady” 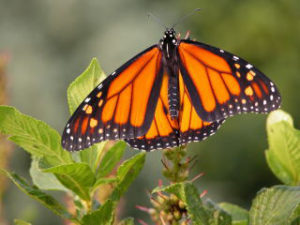 There are people in our lives who cross our paths once in a lifetime. Some of these people leave a part of themselves with us. They become our friends, and they enrich our lives before they leave. This is what happened with Lola, but she was not a person – she was a Monarch Butterfly.

When does a story start and when does it end? Lola’s story with me started on August 20, 2012, when the webmaster of the Washington Area Butterfly Club forwarded me a message: “Monarch Help Needed! I noticed a fallen Monarch today. His wing was torn and he could not fly… We have the butterfly inside right now because of the rain and failing wing. Any help would be appreciated.” I emailed the person back to learn more. She responded that the top left wing was limp and not moving. I called her to say my friend Harry Pavulaan (a Loudoun County butterfly “guru”) was dropping by later in the day and asked if she could bring the butterfly to us. Debbie and her daughter, Ella, drove over one and half hours from the Baltimore area to bring us the butterfly. When Harry looked at the wing, he decided it could not be fixed as it was broken where it connected to the thorax. Debbie and Ella decided to leave the butterfly, a female, with me. I asked Ella to give the butterfly a name and she said, “I think I will call her Lola.”

On Lola’s first night, I hand-fed her a solution of 1 part honey to 10 parts water. She thrived on this honey solution fed to her two times a day. Three days later on August 22, she began laying eggs on milkweed leaves. I carefully removed these leaves and put them into containers. While Monarch eggs usually hatch within three days, these took five days. Anyone who raises Monarchs knows that caterpillars wait for no man. Once hatched, I immediately had to start collecting milkweed for them to eat. Monarch Butterflies use milkweed (Asclepias) as a host plant. There are at least 15 different species of milkweed in Virginia.

On August 25, I found another injured Monarch in the garden. His left wing was torn and I repaired it, but later in the day I found him flopping on the ground. He had completely lost his wing! I named him Lucas and decided to take him in to meet Lola. Lucas and Lola became a couple.

Every day, I would feed Lola and then put her out into a net cylinder that contained potted milkweed. She laid eggs every day. I didn’t count the eggs, they were too numerous, but I estimate she laid over 500 eggs. Monarchs can lay 600 – 900 eggs during their lifetime, but the average number is 100 – 300.

As Lola continued to lay eggs, I decided to share the wealth. I gave eggs and newly hatched caterpillars to teachers in Loudoun County, Fairfax County, and many individuals in the Northern Virginia area. I raised over 300 of Lola’s babies myself. Many of Lola’s offspring were tagged and released at events in locations such as Sky Meadow State Park, Runnymede Park in Herndon, and Willowsford Farm in Ashburn. Everywhere Lola’s progeny went, they brought awe and joy to adults and children.

Lola’s life ended on September 5 – but her story does not end. While Monarchs hatched during the breeding season only live 4-6 weeks, those that emerge in August and September live 7-8 months and migrate to Mexico. Many of Lola’s offspring were tagged before release so if any of these tags are found in Mexico, we will have proof some of them survived the long migration. Even though Lola herself could not make the journey, my hope is that some of her offspring made it to Mexico and survived the winter. I hope they are starting the return north and will continue Lola’s story. When we see Monarchs again in Loudoun County this summer, there will be more gardens for them to visit thanks to the dedicated efforts of the Monarch Project and others who care about them.