If you have ever taken an early spring walk through the woods, perhaps you’ve been fortunate enough to hear the melodious serenade of the Wood Frog chorus. Once temperatures remain consistently above forty degrees, male Wood Frogs (Rana sylvatica) emerge from the leafy forest floor to nearby vernal ponds or wetland areas to attract females for mating. Gathered together en masse around the water source, the males’ song, which can only be described as a loud chatter or clucking, draws the females from the water. It is a sound that represents the coming of spring and the emergence of life from the forests. 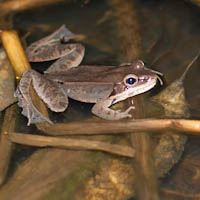 Rising from a cold winter’s nap and making that trek to the water for breeding is not an easy process for the Wood Frog to make each spring. Both male and female Wood Frogs are coming out of the deep hibernation of winter, which sometimes means they have literally been frozen solid during the cold winter months. If even the smallest frost particle touches the Wood Frog as it is nestled down deep in the leaf litter or wedged under a rock or piece of dead wood, a process is triggered deep within the frog that slowly freezes it, encasing the inner organs in the frog’s blood sugar. This sugary substance protects the organs until the spring thaw. The Wood Frog performs this miraculous feat, remaining completely still, with no detectable heartbeat for days, weeks, or even months, only to come back to life in the spring ready to seek out his or her mate.

Now, finding a mate can sometimes be a bit of a challenge for the Wood Frog as it is not able to determine the sex of another frog unless it “hugs” the other frog, a behavior known as amplexus. If the suitor hugs another frog, he can determine if that frog is a female already full of eggs, a female ready for breeding, or a male, in which case the offended male will croak loudly and be released without delay. 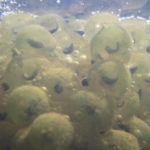 Once they have mated, the female will lay up to one thousand eggs on the surface of the water. She will gently anchor them to some grass or a tree branch. Her eggs will soon be joined by all of the other female’s eggs, forming an “egg matt.” The mass of eggs will begin to grow a layer of algae, which is easily mistaken for pond slime on the surface of the water. Surrounded by a gelatinous substance and closely nestled together, eggs are kept warm by the sun and insulated until the tadpoles hatch.

After hatching, tadpoles take approximately two months to become adult frogs. They survive by eating the pond algae, later transitioning to small insect larvae. Once they are fully grown, they will leave the water and move deep into the forest where their distinct coloring helps to camouflage them among the leaves. Mostly brown in color with a white underbelly, the Wood Frog has dorsolateral ridges running down each of its sides and a distinctive black band that runs from its mouth, across the eye, and ending near its eardrum. The adults are usually about two to three inches long.

As with most frogs, the typical diet of the Wood Frog consists of beetles, worms, slugs, caterpillars, and other small insects. The frogs often become prey to raccoons, birds and other small mammals. Thanks to their coloring, however, they are difficult to see when nestled into their woodsy surroundings and are often overlooked. It is when these busy little creatures are out hopping about that they are most vulnerable.

As the temperatures begin to warm this spring, take a leisurely walk through the woods. If you listen, you may hear the serenade of the Wood Frog, having just awakened from his frosty, winter nap.