Loudoun County is home to seven spectacular species of bats, and they have been the focus of various Habitat Herald articles over the years. Several parks and nature preserves throughout the county recognize the importance of these flying mammals by hosting bat houses on their property. Sometimes, however, bats unwittingly become players in complex human-wildlife conflicts. In May of this year, Loudoun Wildlife Conservancy was presented with a challenging situation in an urgent call from Oatlands Plantation. Oatlands, located south of Leesburg on Rte 15, was overwhelmed by bats, bat guano, and swooping bats. 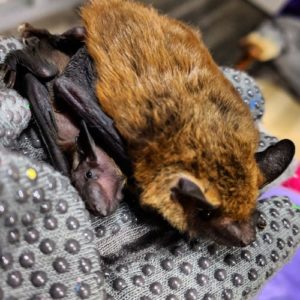 Photo by the Save Lucy Campaign

While bats are most well-known for living in caves, you may spot them throughout our region living in trees, rock crevices, under bridges, in bat houses and attics. Decreasing natural habitat has caused many to make their homes in a variety of shelters, including buildings. Often loyal to their birthplace and hibernacula (hibernation sites), bats will roost at a temporary site in the summer and then return to their caves or other hibernacula in colder months.Bats of temperate regions generally mate in the fall before hibernating for the winter.

Fertilization occurs in the spring at which point pregnant females move from hibernacula to warmer roosts or nursery colonies. A month or two later, the mother bears one or two young. Baby bats nurse from their mothers until they are developed enough to fly and catch their own insects, at about nine weeks for Big Brown Bats.All bats in the United States are insectivorous and are, in fact, one of the most important natural pest controllers. Little Brown Myotis, one of the most common species in Loudoun County, can eat up to 1,200 insects in an hour. A 150-bat colony of Big Brown Bats, another common species, can consume enough adult cucumber beetles to prevent egg-laying that would produce 33 million larvae.

White Nose Syndrome Bats are in great danger due to White Nose Syndrome (WNS), a fungus that grows on bats’ noses, waking them from winter hibernation. The extra energy they have to expend from being woken forces them to exit hibernacula and search for food, which is extremely scarce in the freezing months. As a result, many bats die not directly from WNS, but from starvation.

According to Bat Conservation International (BCI), this condition has led to the most precipitous wildlife decline in the past century in North America. Hibernating bat populations in New York and Vermont have almost completely disappeared in the last 4 years, and more than 50% of American bats are in decline, many of them because of WNS.WNS has been confirmed or is suspected in nine counties in Virginia.

While Loudoun is not yet one of them, three of the affected species Big Brown Bat, Little Brown Myotis, and Indiana Bat are known to occur in Loudoun County.Fortunately there have been some efforts to curb the spread of WNS. Many caves along the East Coast have been closed due to the fear that spelunkers (recreational cave-goers) may be transporting the fungus from one cave to another. Some states and federal agencies are funding research, but solutions to WNS remain to be found.While WNS is perhaps the most serious and misunderstood problem affecting bat populations, it is not the only one.

Nearly all bat populations in Loudoun and across the country are suffering dramatic declines due to habitat destruction, as woodlands and farms are developed, and to loss of food sources, as insect populations decline due to pollution. Outdoor cats and humans also kill thousands of bats outright, the former for food and the latter often because of misinformation.

Oatlands Plantation, a National Trust Historic Site and National Historic Landmark, represents 200 years of American history. Its historic buildings, gardens, and grounds host tours, educational programs, weddings, afternoon teas, and other events. In previous summers, the staff at Oatlands had noticed bats flying over the lawns at dusk, but became concerned this year when the guano on the mansion’s front porch tipped them off that bats were roosting in the tops of the 200-year-old Corinthian colonnades. The bats were also creating a lot of consternation flying around bridal parties, according to Executive Director David Boyce. The columns, says Finance Director Carole Greetham, are the icon of Oatlands.

The staff at Oatlands was divided. Some thought that extermination would be the quickest and easiest solution to the problem, while others, who recognized that bats keep the bug population at bay, wanted to keep the bats around – just not in the buildings. They considered putting wiring around the top of the colonnades to keep the bats out, but were concerned that this might trap and kill many of the bats.Boyce called several exterminators for estimates, but sensing that there may be a more humane solution, he contacted LWC for advice before moving forward.

With White Nose Syndrome and rapidly decreasing bat populations in mind, LWC quickly researched local bats. We spoke with bat rehabber Leslie Sturges from Bat World NOVA. Leslie recommended floating foil balloons near the roosting area as a quick solution, which may interfere with a bat’s echolocation abilities and dissuade them from roosting in that location. In our research we came across a few other solutions, some of them less humane than we would like and most of them seemingly insufficient to deal with large numbers of bats.

However, we soon discovered that experts (BCI, Humane Society US, and other wildlife removal experts) agree that bat exclusion is the only effective way to permanently remove bats from a building. It was obvious from Oatlands’ complex historical architecture that a professional would be needed to conquer the exclusion. Fortunately, BCI has an easily accessible listing of certified bat exclusion experts across the country.

We contacted John Griffin, Director and certified bat expert at the Humane Society’s Wildlife Conflict Resolution Service office in Gaithersburg. Next, we communicated all of our research and discussed the various options with Boyce at Oatlands. We also informed him of the enormity of the bug control service that bats perform and related the severity of WNS to bat populations. He agreed that large-scale bat exclusion seemed to be the best solution and invited Griffin to the plantation to assess the situation.

Having inspected the mansion, Griffin concluded that there was a maternal colony of 50- 100 Little Brown Myotis and possibly some Big Brown Bats roosting in four or five of the columns. The presence of several pups meant that to ensure the survival of the entire colony, Griffin would have to wait until the fall when the pups are fully grown to perform the exclusion. In September, he will install one-way check-valves by covering open areas in the columns with mesh cones at night after all the bats have left their roost.

After a week he will install a permanent hidden custom exclusion which blocks re-entrance into the Corinthian colonnades. Griffin will also erect bat houses on the property in the Carter barn area where there are plenty of bugs to be eaten. While it can sometimes take years for bats to find, accept, and move into a bat house, staff are hopeful that their bats will return to Oatlands next spring and use the bat houses. Boyce and Oatlands plantation staff are thrilled with the opportunity they were handed to learn about bats, the information they were provided through the work of LWC, and the comprehensive solution offered by the Humane Society. When asked about the future of their bats, Boyce affirms, Oatlands needs to protect and promote the welfare of our bat population.

Human-wildlife conflicts, like the one at Oatlands, are complex yet not uncommon predicaments that wildlife unwittingly become part of. Without research, we do not fully understand the complexity of the ecosystems in our own backyards, and this lack of knowledge can lead to hasty, unwise decisions. White Nose Syndrome is devastating bat populations nationwide, and exterminating a colony could mean killing off one of the few healthy communities remaining. Like bats, many animals find themselves regarded as pests, when they really are not and,in fact, provide many valuable services for us. Perhaps if we knew more about them and reconsidered the way we perceive intrusions into our world, we could avoid future degradations to our ecosystems.