When many of us hear the word pawpaw, we begin to hum “The Bare Necessities” from Jungle Book and can almost picture Baloo the Bear waxing poetic about picking “a pear of the big pawpaw.” From the lyrics, it is pretty clear he’s singing about a favored fruit, but few people really know much about the fascinating pawpaw tree or the delicious fruit it produces. 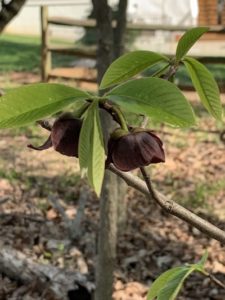 The pawpaw (Asimina triloba) can be found in most eastern states, and it is believed that much of the credit for this lies with the American Indian who spread the seeds from the Great Lakes in the north to the inland areas adjacent to the Gulf of Mexico in the south.

In order to thrive, the pawpaw requires a minimum of 400 hours of winter chill and at least 160 frost-free days. The pawpaw prefers a humid continental climate and is sensitive to areas of low humidity with dry winds or cool maritime summers. As a result, the pawpaw is rarely found near the Atlantic or Gulf coasts.

The pawpaw can be described as an understory deciduous tree or bush which typically ranges in height from 12 to 20 feet. Pawpaw trees frequently produce root suckers a few feet from the trunk which, when permitted to grow, can result in a pawpaw patch arising from a single individual. The pawpaw enjoys well-drained soil and does best when planted in filtered sun or shade when young.

A mature pawpaw thrives in full sun and makes a striking landscape specimen. Though not commonly practiced, the pawpaw can be grown in a container. However, the container must be very large and deep in order to properly accommodate the root system, and the plant requires routine pruning in order to maintain a smaller size.

The pawpaw’s foliage is dark green with drooping, oblong leaves that can reach a length of up to 12 inches. The result is a tree that can appear almost tropical. The foliage turns a rich, warm yellow in the fall, just prior to dropping off. 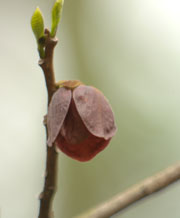 Velvety, dormant flower buds develop in the axils of the previous years’ leaves. The flowers of the pawpaw bloom along the tree’s branches prior to the emergence of the foliage and can grow either singly or in clusters. The upside-down, two-inch blooms can vary in color from white to purple, or even a reddish-brown.

The fruit of the pawpaw is the largest edible fruit of any North American plant and can weigh up to one pound and grow to a length of six inches. Pawpaw fruit grow in clusters with as many as nine individuals growing together. The flesh of the fruit has a soft, buttery texture and a flavor similar to that of pineapple, banana and papaya. The skin of the fruit starts off a light, pale green that blackens as it ripens. The seeds are large and resemble lima beans.

The pawpaw goes by many names, including the prairie banana, poor man’s banana, Indiana banana, and West Virginia banana, just to name a very few. A member of the Annonaceae family, or custard-apple family, the pawpaw is a relative of the cherimoya, sweetsop, ylang-ylang and soursop; however, the pawpaw is the only member not confined to the tropics.

Aside from the pawpaw’s unique tropical beauty and delectable fruit, this remarkable tree also serves as the only host (food) plant for the Zebra Swallowtail butterfly caterpillar. Perhaps you will have the good fortune of spotting a pawpaw on your next hike or butterfly walk and can fully appreciate what Baloo was making such a fuss about.