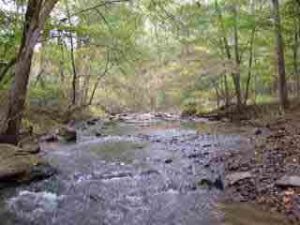 A healthy stream with a natural riparian buffer and tree canopy that has been preserved.

Streams in Loudoun County need protection.  A 2009 study of 200 stream sites throughout Loudoun, funded in part by the Environmental Protection Agency (EPA), found that 78% of the stream miles were stressed or severely stressed due to poor water quality.

The Loudoun County Water Resources report published findings that bacteria in 63% to 83% of streams sampled between 2005 and 2009 exceeded the Virginia Department of Environmental Quality (DEQ) limits for recreation/swimming.

In 2007, DEQ posted Health Advisories along Broad Run and Goose Creek warning against eating fish due to the presence of PCBs in fish tissue.

Non-Point Source pollution refers to pollutants that enter a stream not at a specific point through a single pipe, but at multiple points wherever rainwater runoff flows overland and enters a stream.  The type of pollutant that enters a stream depends on the particular type of land use.

For example, in residential areas, fertilizers, herbicides, and pesticides improperly applied to lawns and gardens can be washed off the land and carried to streams by rainwater runoff.   Agriculture can result in similar types of pollutants, and livestock can introduce bacteria and sediment to streams.  Oil, de-icing chemicals, and particles deposited on paved surfaces can end up in streams through runoff.  Unlike Point Source pollution, Non-Point Source pollution is difficult to quantify and regulate and while not regulated now, it may be in the near future.

As land use changes from natural conditions, impervious surfaces such as rooftops and pavement prevent rainwater from soaking into the ground.  Instead, the amount of rainwater runoff increases, resulting in stream water velocity increasing to erosive speeds.

Pollution from Non-Point Sources can be effectively reduced by “Mother Nature’s filters,” otherwise known as riparian buffers.  Riparian buffers are areas of land adjacent to streams that are protected so that trees and other vegetation can grow.  Riparian buffers have many benefits, including:

(For a thorough and excellent description of riparian buffers, see the Fall 2007 issue of the Habitat Herald, Volume XII, Issue 3.)

Currently, riparian buffers are not protected in Loudoun County.  Witness the destruction of over 400 trees along the Potomac River on the Trump National Golf Course (Washington Post, August 13, 2010).  Riparian buffers need to be protected to help maintain clean and healthy streams.  We all need clean water to drink, bathe, and grow and prepare our food.

The Chesapeake Bay Protection Ordinance (CBPO) would protect riparian buffers in all parts of Loudoun County, agricultural and residential alike.  On September 21, the Board of Supervisors is scheduled to consider the CBPO and will, hopefully, adopt the ordinance.

Visit the Loudoun Clean Streams Coalition website at www.cscloudoun.wordpress.com to learn more about the ordinance and see how you can help maintain healthy streams.