In streams and lakes throughout the Northeast in the springtime, you may notice freshly hatched stoneflies, mayflies, and caddisflies disappearing into the mouths of the intriguing Eastern Brook Trout.  The brook trout’s native range is from the Hudson Bay down to the Georgian Appalachian Mountains and as far east as the Great Lakes and Manitoba, Canada. 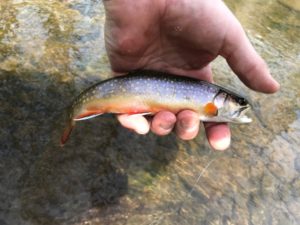 As one of the only trout species native to many eastern states, Brook trout are intolerant to slight changes in their habitat and can be found only in cold, clean, well-oxygenated creeks, rivers, and lakes.  They are also territorial and quite intolerant of competition from other species.  For these reasons, they are excellent indicators of stream quality.

Eastern Brook Trout feed on a wide range of insects, crustaceans, mollusks, worms, fishes, and amphibians. However, they are often observed eating insects such as stoneflies, which are—not coincidentally—another water-quality indicator species.  In the springtime, some brook trout, known as salters, run to the sea for a few months and may feed on a greater variety of organisms than their strictly freshwater-dwelling counterparts.

Interestingly, identifying characteristics and behavior vary greatly depending on the trout’s habitat.  Eastern Brook Trout are generally olive green to dark brown with green marbling on the back. The sides of the fish are lighter and are characterized by red spots with blue halos, while their bellies may be silvery-white to red.  Fins have reddish coloration with black lines and white leading edges. In cold mountain streams, brook trout reach a maximum of 6 inches in four years. Those living in lakes or larger water bodies may reach 20 inches and weigh nearly 4 pounds.  They generally live about five years.

Virginia stands out in the mid-Atlantic as home to 36 sub-watersheds with a healthy presence of stream-dwelling brook trout and 80 sub-watersheds in which populations have been identified as present but reduced.  On the other hand, a 2005 study showed that regionally Virginia also had the largest number of brook trout-inhabited sub-watersheds destroyed, specifically 148.

Thanks in part to its value as a game fish, there are several conservation efforts aimed at restoring and protecting naturally producing populations.  With its “Back the Brookie” campaign, Trout Unlimited is working on a comprehensive effort to conserve and restore populations and habitat.  The delicate native Eastern Brook Trout could always use another admirer and advocate on its side.