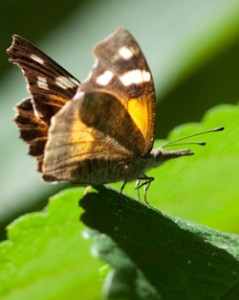 American Snout, one of the highlights of this year’s count

Our 12th Annual Butterfly Count was an amazing success! Going into the count, many of us felt as though butterfly numbers and species were down this year. The rains seemed to cause some plants to bloom later, such as the Joe Pye Weed. The butterflies seemed slow to show up in our gardens and there were certain species that we weren’t seeing at all. But, conducting the count told a different story, showing once again the benefit of going out and systematically gathering the data.

Watching and counting butterflies, we are reminded of the interwoven relationships between plants and animals.  With butterflies in particular we see this relationship in two stages of their lives:  first as the butterflies lay their eggs on host plants and the caterpillars feed on them as they develop; and then as the butterflies themselves nectar on flowering plants such as thistles, New York Ironweed, Milkweed, Black-eyed Susan, coneflowers, Joe Pye Weed and more.

To set the stage, we should note that the weather this year has been marked by a balance between rain and sun. This is compared to the past few years where we have had high temperatures and drought conditions. Having such a mix of rain and sun can be good for plants which the butterflies require but it can also be good for the predators of butterflies and caterpillars, such as parasitic wasps and assassin bugs.

For the first time in our 12 years of conducting the count, the rain interfered with our plans.  As we arose early on Saturday morning, we were in the midst of a downpour and the forecast called for continued thunderstorms throughout the morning and into the afternoon.  These conditions are not fun for counters and cause the butterflies to hunker down in trees and shrubs to take shelter.  So, through email and calling all 60 people who signed up for the count, we postponed to Sunday.  Unfortunately that meant that about 20 of our planned participants could not join us but it did allow for a beautiful day to conduct the count.  Perfect butterfly count weather is mid-80s to low-90s and that was just what we had on Sunday, along with a slight breeze to cool the counters.

In terms of diversity of species – this year saw our highest number of different species: 55 in total and some of these were quite rare. A record for our count, identified by Mona Miller and her team, was a Clouded Skipper at Butterfly Hill Farm. We knew they were present in Loudoun from USGS data but this is the first time we have been able to record it on the count. Other notable rarities include the Giant Swallowtail spotted in two locations, the American Snout, and the high number of Juniper hairstreaks. This year also saw the highest number of Zebra Swallowtails, indicating that it was also a great year for the Paw Paw tree, which is the host plant for this butterfly. Paw Paw trees are a wetland species often found along streams. It must have done well with the increased rain this year. This was also the year for the highest number of Eastern-tailed Blues, a small butterfly which feeds on clover and other plants in the pea family as a caterpillar.

It’s fascinating to look at the data from year to year and we invite you to review it yourself, think about the host plants and nectar plants that the different species rely upon for survival as well as our weather patterns and development in Loudoun and then look at the numbers and trends from the past 12 years. See the 2008 data here and view all our data here.

Having completed the tally of our count, we will submit our data and findings to the North American Butterfly Association (NABA) so that our local Loudoun data can be aggregated with that from other counts that took place in July and August across the country. NABA will then do their own analysis of data regionally and nation-wide to track the populations of our North American butterflies.