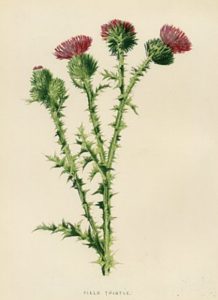 Despite its prickly reputation to most, the thistle is a Scottish icon. Scottish legend says that the thistle saved sleeping Scottish warriors from invading Vikings who, barefoot, stepped in a patch of thistles.

Thistles are defined in the dictionary as “any of various prickly composite plants (especially genera Carduus, Cirsium, and Onopordum) with often showy heads of mostly tubular flowers.” The Cirsium genus alone has 258 species listed in the USDA plant database.

Of the 97 species with distribution maps, only three are non-natives, and 14 are threatened or endangered. This is a large group of plants that can be difficult to tell apart. Thistles are generally biennials, forming only a rosette the first year. Most produce purple flowers and abundant seeds that are disbursed by the wind using thistledown attached to the seeds. Thistles are avoided by many grazing animals because they are prickly, but they are nontoxic and edible. The species listed above are the thistles we are most likely to see in Loudoun County.

Most people think of thistles as weeds, but the plants are listed in wildflower guides. You will need to consult a guide for proper identification, but using the list above you will be able to narrow down the possibilities. You won’t find any of these plants in your local garden center! You will find most, even the natives, listed on invasive plant or noxious weed lists throughout the world.

One of the most prolific, the Canada Thistle, a native of Europe where it is known as Creeping Thistle, is listed as an invasive weed in 43 states. Thistles are most threatening on agricultural and disturbed land. Once established, thistles can be difficult to eradicate. Thistle seeds will not, however, blow in and take over a healthy native plant community, and most thistle seeds will not germinate in the shade.

This summer, when you see a blooming thistle on the roadside or in an abandoned pasture, stop and look closely. On a sunny summer day, the plant will be visited by swallowtails, skippers, fritillaries, and other butterflies and most likely some caterpillars. Later in the summer you will see bright yellow goldfinches eating the seeds. These butterflies and birds enjoy all the thistles on the list, whether they are native or non-native or whether we call them weeds or wildflowers.