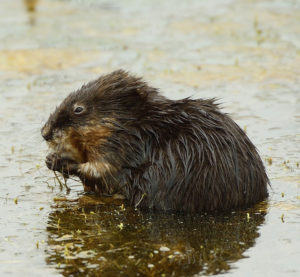 Yet another rodent that is often perceived as a pest — the muskrat. Unfortunately, their good qualities are commonly overlooked. Although they may cause havoc on dams and dikes while burrowing, the aquatic ecosystem would severely suffer without them. Thanks to the muskrats’ consumption of plants for food and den sites, many waterfowl and other wildlife are able to find open water. Various wildlife also use muskrat lodges to rest and nest in.

Besides being a key component of their surroundings, muskrats are very meticulous builders — much like their relatives the beavers. They make sure that their dens are in perfect condition to raise their young. Their techniques include tunneling upward to ensure a dry den, building dome-shaped lodges in areas that lack steep banks, and constructing lodges in shallow, open water to keep dens above high water levels. Their dens can be very long and complex.

To find and observe these animals (always at a distance), it would be best to go looking at night when they are most active. They are almost always in the water and can dive for up to twenty minutes at a time. Muskrats are small animals, usually two to four pounds, and are normally dark brown in color. They have webbed feet and long, naked tails.

The muskrats got their name from their rat-like appearance and the musky odor that secretes from scent glands. The secretions are used to mark out territories, so that violent male confrontation can be avoided. Muskrats can be found throughout the United States, living in groups of up to ten individuals.

The muskrat (Ondatra zibethicus) is considered the largest species of burrowing vole, and has many predators. Although it is a ferocious fighter, a muskrat could mean a meal for such animals as mink, otters, bobcats, house cats, domestic dogs, coyotes, foxes, large hawks and owls, and even largemouth bass depending on the region. Even if a muskrat avoids becoming prey, it generally has a life span of only one year.

Every animal is irreplaceable in our environment, even those that acquire a bad reputation. The more educated people become, the more various animals will become appreciated for their unique contributions and characteristics — even if they are “musky” smelling rodents!