Riparian buffers are the single most effective means of protecting water resources.

Streams guarded by a healthy forested riparian buffer run far cleaner and cooler and are more stable than a stream without any kind of buffer.

Riparian buffers are the strips of grass, shrubs, and, ideally, trees and shrubs along the banks of rivers and streams.

They serve as a buffer between our uses of the land nearby and the water itself, and are the last line of defense for water quality.

They filter nutrients and other pollutants, lower water temperature and improve aquatic habitat, stabilize stream banks, and enhance the area for recreation and wildlife.

Riparian buffers are complex ecosystems which, when managed correctly, perform invaluable services for all of us. 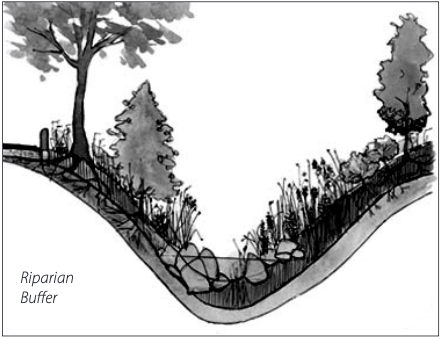 HOW BUFFERS WORK
As Filters: Riparian buffers trap pollutants and nutrients that would otherwise wash into our streams.  Depending on the width and complexity (the amount of vegetated cover), between 50 and 100 percent of the sediments and nutrients settle out and are absorbed by the buffer plants.  A number of scientific studies show that wider, forested buffers are much more effective than narrow, grassy buffers.  Forested buffers achieve filtration rates 10 to 15 times higher than grass turf and 40 times higher than a plowed field.

Phosphorus and nitrogen from fertilizer and animal waste become water pollutants when there is more than the plants can use.  But because phosphorus binds to soil particles, much of it is captured and filtered out of surface runoff by passing through the buffer.  The chemical and biological activity of the soil, particularly in forested riparian buffers, captures and transforms nitrogen and other pollutants into less harmful forms.  These buffers also act as a sink where nutrients and excess water are taken up by root systems and stored in the trees’ biomass.

As Stream Flow Regulators and Stabilizers: Riparian buffers slow the velocity of the water running off the land, allowing water to soak into the soil and recharge the groundwater supply.  By entering the stream at a slower rate and over a longer time period, buffers help control flooding and maintain stream flow during the driest times of the year.

As Wildlife Habitat:  Not only are riparian buffers home to a multitude of plant and animal species, when they are wide enough they serve as invaluable and relatively safe travel corridors for a wide variety of wildlife.  Furthermore, leaf and woody debris that falls into the streams provides food and shelter for small, bottom-dwelling creatures that are in turn critical to the aquatic food chain.

Recreation and Aesthetics:  Forested riparian buffers are especially valuable in providing attractive green screens along waterways as well as recreational opportunities for hiking, fishing, and camping.

THE RIGHT BUFFER
Different circumstances require different widths and types of riparian buffers.  Under natural conditions, riparian buffers provide a dynamic yet stable ecosystem along most rivers and streams, and are usually forested.  Buffers vary according to where they are and what conditions exist in that location.  Riparian buffers do not have fixed linear boundaries but vary in width, size, and character. Most experts agree that, of all the various kinds of buffer vegetation, forested buffers offer the greatest range of environmental benefits.

When restoring or enhancing an existing buffer, several factors have to be considered.  Besides determining what its primary purpose should be, topography, hydrology, existing vegetation composition, and the type of soil all make a difference.  Steeper slopes call for wider riparian zones, as do wetter soils and more intensive land use outside the buffer.

How wide a buffer should be maintained also varies.  The basic, bare-bones buffer is 50 feet from the top of the bank, but every additional foot provides additional benefit.  On smaller streams you can usually get by with the smaller buffers, but steeper slopes and less permeable soils require wider buffers.  And while 100 feet of buffer will remove most pollutants, clay soils may require as much as 500 feet.

For cold-water fisheries, the stream channel should be completely shaded, while warm-water fisheries do not require this unless there are problems with algae blooms.  In either case, a 100-foot buffer should be adequate, although the wider the buffer, the healthier the aquatic food chain.

Much greater forest buffer widths are needed for wildlife habitat purposes than for water quality purposes.  Three hundred feet is generally accepted as a minimum, and larger animals and interior forest species generally require more.  However, narrower widths are probably acceptable for travel corridors to connect larger areas of habitat.

PLANNING THE RIGHT BUFFER
Most experts agree that a three-zone buffer, as shown in the illustration, is a good model for protecting, restoring, or enhancing riparian buffers.

Zone 1 is the portion of the buffer closest to the water and extends upland from the stream’s edge.  Ideally it should be undisturbed and include trees and shrubs.  Some experts say it should never be less than 35 feet on each side of the stream; others say at least 50 feet.  On smaller streams the tree canopy will meet and fully shade the water, providing maximum control over light and temperature.  The roots of the trees and shrubs will reduce soil erosion, stabilize the stream bank, and keep sediment, excess nutrients, and pollution out of the water.

Zone 2 is managed forest and is immediately landward from the first zone and should be at least an additional 50 to 75 feet wide depending on the size of the stream, topography, and soil type.  This zone protects water quality by removing, transforming, or storing nutrients, sediments, and other pollutants.  It also provides food and shelter for hundreds of wildlife species.

Zone 3 of the buffer should be comprised of dense grasses and/or broad-leaved herbaceous plants and wildflowers or other control measures and will evenly spread surface water flow and absorb nutrients.  This zone assists in slowing runoff, filtering sediments and pollutants, and allowing water to infiltrate the ground, minimizing flooding and recharging groundwater.  As a result, both Zone 2 and 3 function more effectively.  This zone can be as small as 20 feet.

All of these zones will vary in width according to factors outlined earlier, and while 35 feet may be satisfactory in some situations, 500 feet may not be sufficient in others.

Remember, the bigger the buffer, the more effectively it will protect both water and habitat quality.

Sources and Resources:
Introduction to Riparian Buffers, by the Connecticut River Joint Commissions of New Hampshire and Vermont, 2000.  This publication is a concise and clear explanation of riparian buffers and is part of a series of publications on riparian buffers.  See www.crjc.org for it and the CRJC’s other fliers.  It was the basis for much of the information in this article.

Protecting Goose Creek’s Watershed with Riparian Forest Buffers, by the Goose Creek Association, available through their website at www.goosecreek.org.