Reflections on the American Kestrel 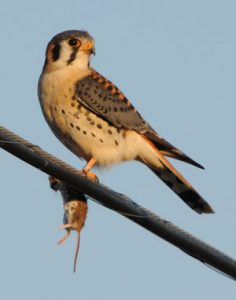 The American Kestrel, a small, open-land falcon which often may be seen perched on a telephone pole or wire, is perhaps the most common diurnal raptor in North America.

The population of the American Kestrel is thought to be stable overall, but it appears that there have been significant decreases in populations of this species in some areas in recent years, particularly in the Northeast.

The many birders who covered still largely rural Loudoun County on International Migratory Bird Day on May 12, 2007, reported seeing six Kestrels, mostly in the southwestern part of the county, as compared to nine on the same day last year.

Although valid conclusions cannot be reached on the basis of one day or even a season of birding and the American Kestrel is still a fairly easy bird to find in appropriate habitat, many suspect that it is similarly undergoing a long-term decline in northern Virginia and elsewhere in the region.

Although the causes of the American Kestrel’s decline in the Northeast are not known, it is suspected that the loss of open habitat from human development and the natural reforestation of former agricultural areas have had an adverse effect, both through a loss of habitat and a resulting increase in populations of and predation by the Cooper’s Hawk.

The latter factor is suggested by the numbers of these birds recorded at the Cape May, New Jersey, Hawk Watch in recent years and anecdotal testimony regarding the predatory activities of Cooper’s Hawks at American Kestrel nest boxes. As to the former, 2004 produced a new all-time high for Cooper’s Hawks and a new all-time low for the American Kestrel at the Cape May Hawk Watch.

Numbers of the American Kestrel increased there in 2005 and decreased again in 2006 to a number which was still significantly above the 2004 level but nevertheless more than 40% below the 30-year average, while numbers of the Cooper’s Hawk continued to set new records in both 2005 and 2006.

Another potential cause of the decline of American Kestrels is pesticides. There is, however, no evidence of a current widespread contamination threat to the American Kestrel from pesticides, although some harm to it may result from efforts to control insects, a principal part of its summer diet. Factors relating to the density of small rodents, another principal source of prey, also must be considered, although it is unlikely that this factor would result in a long-term, as compared to cyclical, decline in numbers.

Populations of the American Kestrel also may be affected by a scarcity of nest sites. The Kestrel is a secondary cavity nester which nests in holes in trees, rock cavities, and crevices in cliffs, as well as artificial nest boxes and even small spaces in buildings.

The number of suitable breeding cavities limits the breeding density of the American Kestrel, and the availability of secondary nest sites thus must be considered in an evaluation of the decline in the population of this species. A final consideration is the effects of West Nile Virus, which has had adverse impacts on the populations of several species of birds.

It is hoped that some information about the reason(s) for the decline of the American Kestrel in the East will result from a study recently started by the Delmarva Ornithological Society. This study will attempt to estimate the current population of the American Kestrel in Delaware, identify reasons for its declining numbers there, and develop strategies, such as increased placement of appropriate nest boxes, to stabilize or increase the population.

Both sexes of the American Kestrel are of course easily identified by the thick, vertical black streaks behind and in front of their white cheeks, or “mustache” marks, but they also have a much less noticeable black spot behind each back mustache mark, toward the rear of the rufous nape.

These black spots resemble a pair of eyes (ocelli, or false eyes) when the bird is viewed either from the rear or from the front when the head of the bird is bent over working on prey. (For a good depiction of this plumage feature of the American Kestrel, see Plate 35 on page 87 of Hawks of North America – Peterson Field Guides (2nd ed. 2001).) Similar neck spots are present on the Northern and Ferruginous Pygmy Owls, and there are hints of such spots on the neck of the Elf Owl. These neck spots are similar to the prominent white spots on the back of the ears of tigers, which can similarly resemble a pair of eyes.

It has long been theorized that these neck spots might function as false eyes which deceive potential predators and prey as to which way the animal is facing. The American Kestrel’s habit of bobbing its head may help make its neck spots look even more realistic, except perhaps to a voracious Cooper’s Hawk which has otherwise identified it by its prominent “mustache” marks or otherwise!

Test your knowledge of Kestrels–try our Kestrel Word Search Puzzle.