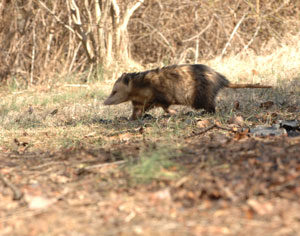 What species has grayish fur, a pink nose, a rat-like tail, small ears, a triangular head, a pouch for its young, and a thumb-like appendage? What is the size of a house cat, has been around for 70-80 million years, and survived since the times of the dinosaurs?

It is the opossum (Didelphius virginiana).

This marsupial is one of the longest surviving mammalian species in the world and the only native marsupial in North America. The name opossum was first used in 1608 by Captain John Smith who misunderstood the Algonquin name apasum which means “white animal.”

Often people picture an opossum asleep while hanging upside down from a tree by its tail. This is indeed a misconception. It has a prehensile tail — capable of grasping and holding objects, yet only capable of supporting the opossum’s full weight briefly. The tail is used to help the animal balance and cling to trees as well as to carry nesting material. The opossum also has a thumb-like appendage called a hallux on its hind legs that allow it to grasp branches much easier.

Opossums prefer deciduous woodland habitats near streams; however, they will live in many different habitats. When it is very cold out, opossums will find a den and “hole up” to protect their skinless ears, tails and toes from frostbite that can occur from the frigid ambient temperatures.

This wide variety of living conditions also accompanies a wide array of dietary choices. Opossums are nocturnal and omnivorous. Their excellent sense of smell helps them to find food during the night. They eat all kinds of different animals, insects, and plants, and they even will eat garbage and dead animals. This habit of eating dead animals often results in the opossum getting hit by cars while feasting on road kill. And, their garbage eating habits are undesirable to humans who do not understand this species.

The opossum has a short life span of only one to two years, making it the mammal with the shortest life span relative to its size. 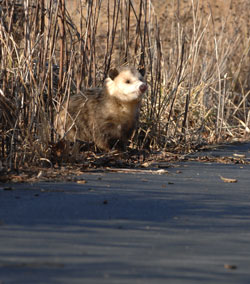 Upon sexual maturity, a female opossum can have up to 25 babies; however, she usually only bears seven to nine at a time. During the time of “first birth” (11-13 days after conception), the babies are as small as navy beans. They climb up the mother’s underside and into her pouch to find a teat on which to nurse. This nursing space is limited to 13 young. Often during this journey a number of the babies will die. To aid the babies in this perilous journey, the mother will lick her fur to create a moist path for them to follow. If they survive this migration to the pouch, they will nurse for 55-70 days and emerge from the pouch to ride on their mother’s back for four to six weeks. One female opossum can have up to three litters a year.

Opossums have protective behaviors. Sometimes opossums will run around and bare their 50 sharp teeth, growl, belch, drool, urinate and/or defecate to help scare away predators or make predators believe they are sick. However, opossums are best known for playing dead. This behavior entails rolling over, drooling, becoming stiff and breathing very slow and shallow in a coma-like state. Opossums can stay in the coma-like state a minute or two or upwards of several hours. If you think you have a dead opossum in your yard, leave it alone for at least four hours before you call animal control to remove it.

On occasion, you might have the opportunity to see opossums around your home. Usually they are just wandering through and will only stop temporarily. They may surprise you if they wander into your garage looking for food or decide to hide under your porch looking for shelter or a place to rest. If having an opossum so close to home is unsettling for you, there are a few things you can do:

Opossum in your garage: If an opossum wanders into your garage, it will also wander out. If you need to, you can encourage it to leave by making a trail of food leading out. Once you are sure the opossum has left, just shut the door.

Opossums under a porch or house: If an opossum has decided to live under your porch or house and you’re not comfortable with this, then you’ll want to seal up the entry points. To do this, first find out where the opossum is entering. You can do this by sprinkling flour around the perimeter of your porch and scrunching up newspaper that you put along the perimeter as well. Check for tracks in the flour and movement of the newspapers to identify the entry and exit points.

Once the animal has begun its nightly foray for food (several hours after dark), loosely close the opening with netting, straw or other fibrous material that an animal trapped inside can push away to get out, but which one outside is less likely to disturb in an attempt to get back in. Once you are sure there are no longer any animals under your porch or home, you should seal the entry points with hardware cloth or another permanent solution.

Opossums in your house: Opossums will occasionally find their way into your home through a pet door. To encourage the animal to leave, close doors providing access to other parts of the house, and open doors through which the opossum can leave and wait quietly. If necessary, an opossum can also be guided out using a broom to gently and slowly nudge them along to the open door.

Opossums in your yard: They rarely have rabies and actually help to “clean up” your yard since they eat pests (cockroaches, rats, snakes, spiders, snails, slugs) and dead fruits from trees. The opossum will likely be moving on in short order and will not be of concern.

Just give them a chance. You might enjoy the benefits that they have to offer you. After all, they not only help control pests but are also living time capsules.

Now that you’ve read through the article, have some fun with our Opossum Crossword Puzzle!

To learn more about opossums, listen to our Opossum Podcast.