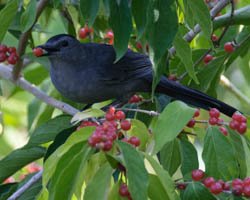 The Gray Catbird (Dumetella carolinensis) is a member of the Mimidae family.  They are dark gray with a black cap and a chestnut color under the tail.  Its cat-like calls from a brush or thicket are a clear sign that there is a catbird in your midst. Like the mockingbird, catbirds are mimics, but when catbirds sing the song of another bird, they generally just sing it once and may add their own slight variations rather than repeating the song as the mockingbird will do.

Catbirds enjoy living streamside and at forest edges with vine tangles and low dense vegetation.  They will also take up residence in our backyards if we have dense shrubbery and berries for them to eat.  An interesting behavior with catbirds is in their nest building ― both the male and female will build a number of nests which they abandon only to have the female build the final nest that is used.

Nests are generally three to ten feet off the ground.  During nesting, the female broods the blue eggs while the male stands guard not far from her, scolding any intruders that come near.  If a cowbird manages to lay an egg in her nest, the catbird will eject the unwanted egg.  While she incubates her eggs, the male will often bring her food.  Catbirds favor berries such as those from the dogwood, holly, inkberry, winterberry, raspberries and even poison ivy (which actually is a great wildlife food).

These birds also eat insects such as ants, beetles, caterpillars, spiders and grasshoppers.  However, insects make up a smaller proportion of their diet when berries are plentiful.   In rearing their young, they will feed them insects until just before they are ready to fledge, at which time the parents will introduce berries to their diet.  Migration for catbirds takes place primarily at night.

They will fly as far south as Panama but also will winter in Florida, Louisiana, Texas and other Gulf states.  If you have catbirds in your yard and want to attract them to a feeder, you can put out dried cherries, raisins, and various grapes and berries.  In early spring, if they arrive before the insects are available, catbirds will also eat small nuts like chopped peanuts and unshelled sunflower seeds.  Catbirds also love to bathe, so a birdbath or sand bath will also attract these birds to your yard.