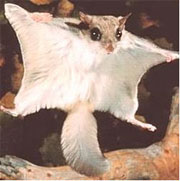 If you have a stand of mixed hardwoods on your property or have access to a similar habitat nearby, there is a chance that at twilight on a summer evening you may fleetingly observe one of the more secretive small mammals that occur in Loudoun County, the flying squirrel.

Aside from bats, the flying squirrel is North America’s only other mammal species capable of flight. However, unlike bats which have wings and are true fliers, the flying squirrel is a glider. It has a loose fold of skin between the front and hind limbs. With its limbs outstretched, this fold of skin is stretched and supports the body as the squirrel glides from tree to tree. Generally the ratio of height loss to horizontal distance traveled is 1:3, or for every foot of height lost, a flying squirrel travels about three feet forward.

Flying squirrels feed on seeds, fruit, buds, young plant sprouts, and leaves, but they also have been reported to eat insects, bird eggs, and meat.

The breeding season of these animals occurs in late winter and again during the mid-summer. Up to six young may be born at a time.