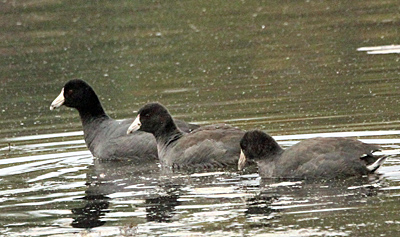 On October 16, 26 birders came together for a pleasant morning of birding at Bles Park led by Bryan Henson and Allison Gallo.  Mockingbirds entertained us all around the parking lot along with the customary fringe habitat species: European Starling, Feral Rock Pigeon and House Sparrow.  Farther into the park, we found White-throated Sparrows, and we started to find more of our returning winter species.  Ruby-crowned Kinglets graced us with their active presence in several places along the walk. The marsh provided good looks at Belted Kingfisher, Mallards and a Green-winged Teal.  Along the trail in the shrubs, we heard Eastern Towhees and more kinglet and sparrow activity.  A Sharp-shinned Hawk provided a quick flyby followed by an Osprey shortly thereafter.  A flock of Yellow-rumped Warblers hanging out in a tree provided amusement as they flitted about.  An Eastern Phoebe perched at the top of a tree giving the whole group a good look.

One highlight of the walk was a Blue-headed Vireo that provided close looks for some of the group.  On the later half of the walk, we found a flock of Robins that was munching on poison ivy berries while a Hermit Thrush was vocalizing nearby.  Clearly, winter is moving in and many of our summer birds have headed south and our winter visitors have joined us.  Birding always provides reminders of the joyful changing of the seasons.