Hope for the Embattled Monarch Butterfly?

Everyone loves a good Monarch (Danaus plexippus). It is found in many countries around the world, but ours is special: it migrates. Our migratory Monarch has three main pathways. The small western branch of Monarchs winters in Baja and has all but vanished. The main migratory pathway is through the middle of the U.S. and their numbers are drastically reduced. The eastern branch, which shares winter quarters in Mexico with the middle branch, seems to be actually increasing.

In June of this year, a new study, based on data provided to the North American Butterfly Association by citizen scientists all over the U.S., was published in the journal Global Change Biology asserting that the eastern branch of the Monarch appears to be increasing. Great news! But in July the International Union for the Conservation of Nature (IUCN) added the migratory Monarch (Danaus plexippus ) to its Red List of endangered species due to habitat loss and pesticide usage. That doesn’t sound like great news. 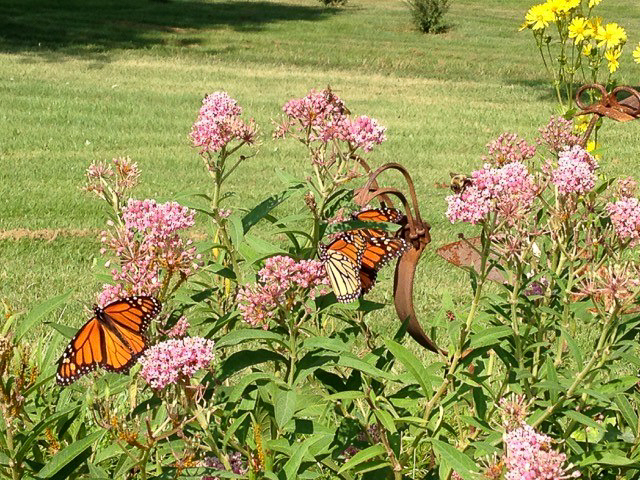 The Monarch does not currently enjoy U.S. federal protection under the Endangered Species Act (ESA). The ESA prohibits the importing, exporting, taking, possessing, selling, and transporting of endangered and threatened species (with certain exceptions). The ESA also provides for the designation of critical habitat and prohibits the destruction of that habitat. To get the Monarch listed as endangered in the U.S. will be an uphill battle. While the caterpillar feeds on milkweed, a common wildflower, and is therefore no danger to crops, many crops including the weeds around them are sprayed regularly with insecticides or treated with herbicides, killing both pollinators and the plants they depend on. Open meadows where these plants grow naturally are fewer and farther between.

Here in Loudoun, many homeowners, homeowner associations (HOAs), and farmers have responded by actively installing Monarch waystations, adding milkweed to home gardens, and not mowing parts of open fields so milkweed can thrive. Milkweed is a roadside plant, and departments of transportation and utility companies have been responsive to local concerns by mowing at intervals that take into account the Monarch’s life cycle.

The migratory Monarch is endangered, but we can help by planting pollinator-friendly gardens, encouraging our neighbors to plant native species, and asking our HOAs to set aside room for natural meadows. The data shows us that this can work to help one of our favorite insects, the Monarch.