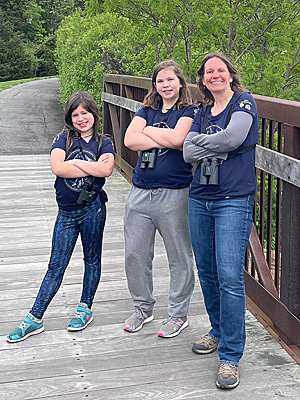 When the Ligi Nestlings completed their first Birdathon in 2009, McKenzie was only two years.  Spring Ligi never envisioned they would still be going strong 14 years later. Addison and Catherine were added to the team over the years, and Dad was included for crowd control. He’s become bird spotter and chauffeur extraordinaire. This year, McKenzie decided she is ready to fledge the nest and do her own thing so our team is evolving yet again. McKenzie had a wildly successfully run, inspiring other youth birding teams and raising thousands of dollars for Loudoun Wildlife.

Though down a teammate, Addison and Catherine really stepped up and contributed to almost every sighting. In several cases, they spotted or heard the bird first. We started at one of our favorite spots — Olde Izaak Walton Pond. After getting good looks at a Solitary Sandpiper, Addy and Spring worked to identify an elusive pair of Orchard Orioles. The highlight, however, was a beaver swimming in the pond. Catherine found some poison ivy and wisely taught us “don’t be a dope, don’t touch the hairy rope.”

Next we headed to a new place for our team, the Broadlands Wetlands Nature Preserve. There were birds everywhere — from the swallows flitting above the water and Red-winged Blackbirds announcing their territories to the clumsy goslings and graceful Great Egret. Addison was stumped by a female Red-winged Blackbird, but solved the mystery with just a little help from mom. Meanwhile, Catherine was pleased to win a staring contest with a goose. 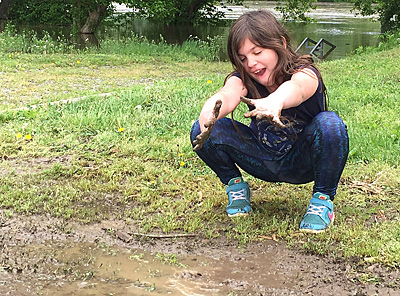 We made a quick stop at Claude Moore Park where we added bluebirds, sparrows, and two more Solitary Sandpipers. Our final stop was White’s Ford Regional Park to look for eagles and play in the mud. We were surprised by how high the water came up – it covered the trail and steps! The girls each picked a dandelion and made a Mother’s Day wish, placing the flowers in the fast-flowing water and watching them drift downstream. And never fear, they found a puddle in the parking lot to make mud.

One of our final and coolest birds was a Northern Harrier hunting in a field along Hibler Road. The girls’ birding instincts were impressive. Catherine pointed out robins, cardinals, Mourning Doves, and vultures with ease while Addy identified a goldfinch mainly by its flight pattern and call. She also identified a White-breasted Nuthatch, describing its behavior and call to a tee. Those window bird feeders that they love so much (they each have one outside their room) are really paying off!

The Nestlings found 41 species (see below) and raised over $1,000 to support Loudoun Wildlife Conservancy.