While bicyclists zoomed by on the adjacent W&OD Trail on the morning of April 2, six of Loudoun Wildlife Conservancy’s Stream Team volunteers were hard at work conducting a benthic macroinvertebrate survey of the Tuscarora Creek. Lead monitor Emily Maltman guided participants, including Loudoun Wildlife Executive Director Michael Myers, through the entire survey protocol. They started by selecting a riffle and used a combination of rock scrubbing and substrate scrapping to collect macros in a net. Then they sorted, identified and tallied the collected macros to get a stream health score. An example of a larval midge.
Photo courtesy of Missouri Department of Conservation

Just last fall this site received a score of 8 out of 12, indicating that ecological conditions could not be determined at that time. Unfortunately, this time the site received the very low score of 4, indicating unacceptable ecological conditions. Almost two-thirds of the macros collected were pollution-tolerant midges, with lots of other pollution-tolerant macros like black flies, flat worms, lunged snails, scuds and worms in the mix.

Loudoun Wildlife’s Salt Watch volunteers Cori Carlston and Emily Maltman have been keeping tabs on the sodium chloride levels of this Tuscarora Creek site over the winter. Sodium chloride enters our streams in the form of runoff from brine or rock salt applied to winter roads to prevent them from freezing. While smaller amounts of these substances are useful to keep our roads and parking lots safe, overuse doesn’t make things safer – just saltier. And that includes our local streams.

Cori and Emily collected 13 sodium chloride readings over a period from October to April, including 3 baseline readings before road treatments were applied this winter. Out of the 10 winter readings, four were above the EPA’s toxicity threshold of 230 ppm – one as high as 716 ppm. The rest of the readings were near, or over, the Izaak Walton League’s elevated threshold of 100 ppm. These high and constant levels of salt in the stream can make conditions uninhabitable for more pollution sensitive macros, as well as fish and amphibians.

Winter may be over, but you can still help reduce salt runoff into our streams by sweeping up any leftover piles of road salt in parking lots or neighborhood streets. Next winter, you can put down traction enhancers like sand or crushed limestone instead of salt, or just simply follow the salt application guidelines – you actually only need a very small amount of salt to get the job done! 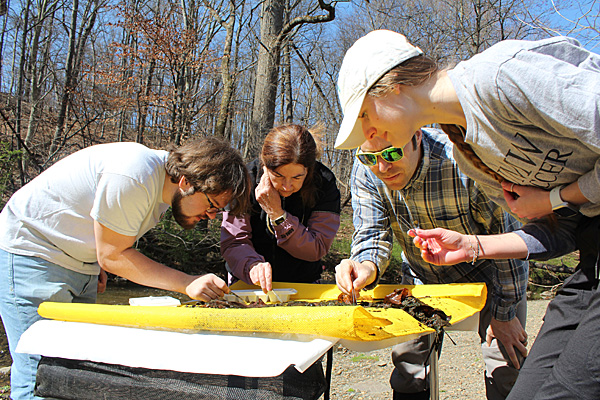