A newly-hatched eaglet has a lot to learn about the world around it. The most important figures in its life are, of course, the parents. An eaglet must quickly be able to identify and bond with them instead of another species. This parental recognition is known as filial imprinting. In eagles, filial imprinting often occurs by learning to recognize the parents’ vocalizations. Birds can also imprint on their nesting site, which can help them find their way back to this territory later on, and guide their choice of nesting sites for their own young. 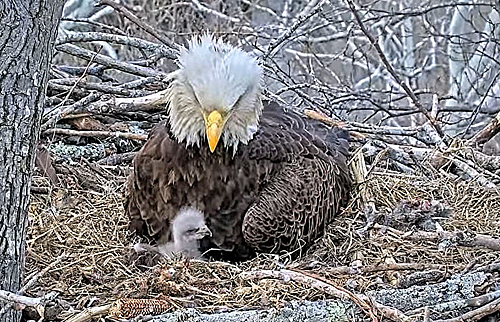 As an eaglet grows, another type of imprinting occurs in which they learn to identify with eagles as a species. In other words, they begin to know they are an eagle. This is important for socialization when young and in choosing a mate when they are sexually mature. In a wildlife rehabilitation setting, caregivers will often wear hoods when interacting with a bird, or use puppets to feed them, to prevent the bird from imprinting on humans. Human imprinting can prevent an eagle from living independently as a wild animal.

The most famous example of human imprinting in Bald Eagles is Challenger, who currently serves as an ambassador for the American Eagle Foundation. Challenger was forced out of his nest during a storm when he was just a few weeks old. While he was rescued and cared for by well-intentioned individuals, intensive contact with humans caused him to be over-socialized. Attempts at release were not successful, as Challenger was too reliant on humans for food. Challenger was placed in the care of the American Eagle Foundation and became an outstanding educational eagle. While this was a good outcome for Challenger, the goal of rehabilitation is to release birds back into the wild.

The Dulles Wetlands eagles have no direct contact with humans, so human imprinting is unlikely. We can look forward to the development of eaglets who can fend for themselves and do their part to increase the Bald Eagle population.