Fourteen people showed up for Loudoun Wildlife Conservancy’s regular bird walk at the Blue Ridge Center for Environmental Stewardship in the far northwestern corner of Loudoun County. The walk  on February 26 was led by Michael Sciortino, Mary Ann Good and Jane Yocum. The day started out cold, and we had hopes that the sun would appear and provide a bit more warmth during the trip. 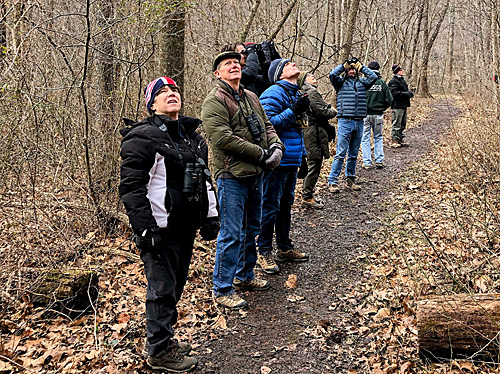 The group recorded 32 species during the walk. To start, we were delighted to see an American Kestrel perched atop a tree near the Demory-Wortman House just as we began the walk. Woodpeckers ruled the day, however, with the group seeing six of the seven woodpeckers that might be possible at the center during the winter. Yellow-bellied Sapsuckers and Red-bellied Woodpeckers were in abundance throughout the walk, with the team recording nine of each species. Evidence of woodpecker activity was clear along the Farmstead Loop trail with numerous refresh holes drilled into trees along the path (see photo below). At various points we had clear looks at Pileated Woodpeckers, which are always a fan favorite.

The group took a short detour over the old trail bridge to find a lone Eastern Phoebe. It was quiet otherwise at the bridge area spanning Piney Run. The group continued along the Farmstead Loop and recorded over 50 White-throated Sparrows, which was surely an undercount given the amount of activity all around. We also recorded a Brown Creeper, numerous White-breasted Nuthatches and a handful of Golden-crowned Kinglets. Along Sweet Run the group clearly heard, but was not able to see, two Belted Kingfishers as they patrolled the stream. We did have sightings of two Hermit Thrushes as we made our way through the woods.

Though the sun never did appear except for a few quick peeks, and the temperatures did not rise much from the start of the walk, everyone seemed to enjoy the three-hour walk.

For a complete list of the birds recorded, see the list below or view on eBird at https://ebird.org/checklist/S103750864. 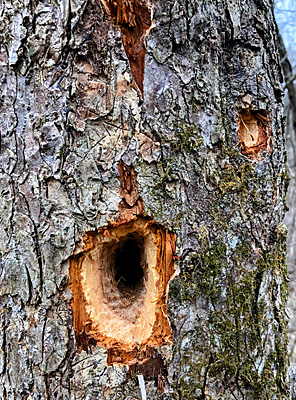