ADVOCACY UPDATE: Bles Park Proposal Does Not Help People and Wildlife Thrive Together

The Bles Park special exception passed unanimously on January 18 with only minor conditions for approval. Despite this outcome, we are committed to continue to work on this to stay engaged and effect positive changes for wildlife and habitat. We want to thank all of our supporters who raised their voices for wildlife.

The conditions for approval included:

These conditions for approval do not satisfy our concerns regarding impacts to the wetlands from the proposed boardwalk and vehicular traffic to the kayak launch, nor do they satisfy our concerns about the significant increase in impervious surfaces in the floodplain. However, the boardwalk amenity is not currently funded, and it will have to come back before the board for funding approval before it can proceed.

There was discussion by supervisors to keep the pollinator meadow beside the pond in its current state rather than turning it into an unprogrammed lawn area. We are seeking additional information on this topic as it was not included as a condition of approval.

We will continue to post updates about Bles Park, and we encourage people to join us on our monthly bird walks on the third Sunday of the month.

On January 18th, the Board of Supervisors are scheduled to vote upon a variety of “enhancements” to Bles Park, a mostly natural area park at the confluence of Broad Run and the Potomac River. Based on public comments by supervisors to date, this proposal seems poised to be approved despite the Planning Commission recommending denial and considerable opposition from residents.

Loudoun Wildlife’s vision for Loudoun County is for it to be a place where people and wildlife thrive together. The proposed “enhancements” at Bles Park do not help achieve that vision.

It is true that the wetlands at Bles Park were created in the 1990’s when the park was established. At that time, the floodplain was also reforested. Wetland mitigation projects such as those constructed at Bles Park are created in response to wetlands being destroyed elsewhere. This is a requirement by the federal government, because wetlands are so valuable to our ecosystem. The purpose is to attempt to recreate the biodiversity and ecological value of the wetlands that were destroyed. The wetlands at Bles Park have tremendous ecological value, and we know this because of the biodiversity of wildlife found there.

Yet, while Loudoun County is actively pursuing purchasing land for future wetland mitigation projects on one hand, it is poised to diminish the biodiversity of the wetlands created at Bles Park with the other hand by constructing a boardwalk through the most sensitive part of the wetlands where shy and reclusive species go to avoid human disturbance. 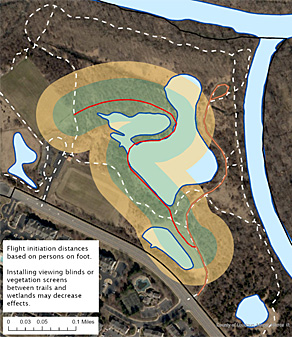 Zone of influence of boardwalk.
Click on map to enlarge

Generally speaking, boardwalks do have a minimal impact on the habitats where they are created, because they are typically constructed in places that are much larger than Bles Park’s 132 total acres and 6.5 acres of wetlands. Huntley Meadows Park is 1,500 acres, Lake Washington (in Seattle) is 315,000 acres, and Everglades National Park is 1.5 million acres. Bles Park is simply not an appropriate location for a boardwalk based on its small size and abundant biodiversity.

Locally, the closest boardwalk comparison is the Broadlands mitigation site which is 8 acres, and it does have an approximately .5-mile boardwalk. However, the biodiversity of birds is significantly less than at Bles Park (190 species all time, 170 last two years) compared to Broadlands (147 all time, 116 last two years). This reduction in species biodiversity of Broadlands compared to Bles Park 147/190 = 77%, or 116/170 = 68% is comparable to the Hennings 2017 literature review that noted “conversation noise of 50 decibels (approximately library speaking volume) caused 35 percent fewer bird detections and reduced detected species richness by 33 percent.” Introducing a boardwalk at Bles Park would result in a decrease in species richness. The shy and reclusive species that a boardwalk would drive away include species that are often only seen in Loudoun County at Bles Park (Common Gallinule, Yellow-crowned Night-Heron, Marsh Wren, Glossy Ibis, and Least Bittern to name a few).

With all due respect to the consultants on this project, Loudoun Wildlife has conducted year-round nature walks for 26 years all across Loudoun County to engage people with nature, and to foster and inspire a greater appreciation of nature. In addition, we study and monitor wildlife populations, and we observe wildlife behavior on a regular basis. We are acutely aware of the impacts of human disturbance on wildlife, and we guarantee that building a boardwalk would have a negative impact on the wildlife at Bles Park, and it would not contribute to people and wildlife thriving together.

Supervisors are considering requiring a study on impacts of vehicular traffic after the kayak launch is opened, which is a nice gesture, but it would not accurately quantify the potential impact of a boardwalk on the wildlife that depends upon Bles Park – breeding and migratory birds and other wildlife, and it would not mitigate the impact caused by vehicles next to the wetlands.

Our suggested alternative of an observation platform or wildlife blinds would give people access to view wildlife, provide alternatives to social trails that have been created (which could then be naturalized), and would protect sensitive wildlife habitat and give shy wildlife a refuge from human disturbance. 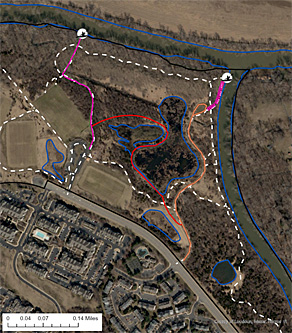 It is true that Bles Park contains active recreation uses and soccer fields, and it is true that on the weekends when there are soccer games, there is a lack of parking (because parking was limited when the fields were constructed due to being in a floodplain) which has resulted in public safety concerns with children walking along Bles Park Drive. While we do not have a perfect solution for this dilemma, at the least, a sidewalk could be constructed on the Bles Park side of the road.

While this proposal seeks to add more parking in the name of public safety on one hand, on the other hand it proposes to introduce vehicles to a gravel path that is currently used by pedestrians to create access to a kayak launch. It would purposefully introduce vehicles, and a public safety issue, in an area currently utilized by families and children. Some supervisors have posited that there will not be many vehicles, so the conflict will be minimal. But if there won’t be many people using the road, why is it even necessary to open to vehicles in the first place?

We have suggested an alternate location closer to the existing parking area. Our alternative is approximately .2 miles, or 1,056 linear feet, or 500 steps from the existing parking area. It would avoid traffic alongside the wetlands, and no new trails would need to be created for this site. Of course, if the parking area is expanded, this distance would be even shorter. Having to travel less than .25 miles, or 1,320 linear feet, is a worthwhile compromise to adequately protect wildlife and maintain a park where people and wildlife can thrive together.

Impervious Surfaces in a Floodplain 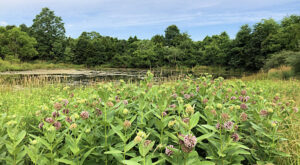 Common Milkweed and other native plants in the floodplain that would be destroyed to create an unprogrammed lawn area. Photo by Michael Myers

Many supervisors view themselves as conservationists or protectors of the environment trying to locally combat climate change, but this application proposes cutting down trees, removing pollinator habitat, and dramatically increasing impervious surfaces all within the floodplain. Many supervisors want Loudoun County government to lead by example. Approving an application on County owned land that results in almost 7 acres of impervious surfaces in a floodplain is going to send a clear message. A message that developers should continue to submit applications and special exceptions that cut down trees in a floodplain, negatively impact wetlands in a floodplain, and destroy native plants and pollinator habitat in a floodplain. That is not a message that creates a place where people and wildlife thrive together, and it is contrary to many Natural, Environmental, and Heritage Resources policies in the Comprehensive Plan.

County parks are public lands that are stewarded by the County on behalf of its citizens. Supervisors have repeatedly expressed a desire for active public engagement, and there has been considerable opposition to these proposed “enhancements”, with local nonprofits and residents speaking out throughout this application process. Rather than sitting down with concerned citizens and stakeholders to find positive solutions that would truly assuage concerns, some supervisors have gone to great lengths to justify approving this application. The public is engaged, and there have been over 60 comments in the Loudoun Online Land Application system all opposing this application (as of 1.13.22), over 2,400 signatures on a petition opposing this application, numerous letters to editor have been written in local papers, many comments submitted at public hearings, and countless emails sent to supervisors and planning commissioners.

We agree that Loudoun County needs more active recreation amenities for residents, but we are urging the Board of Supervisors to listen to their constituents who are stating that Bles Park is not the appropriate place for them. We urge the Board of Supervisors to explore other options, and remove the proposed boardwalk, not allow vehicular traffic along the gravel path alongside the wetlands, remove the unprogrammed lawn area, and significantly reduce the total amount of impervious surfaces proposed in the floodplain, so that people and wildlife can thrive together at Bles Park.