Volunteer of the Quarter: Ken Dzombar

The Bluebird Monitoring Program is Loudoun Wildlife’s largest Citizen Science effort, with 120 people monitoring Eastern Bluebird nest boxes on 52 trails throughout the county. Six of these trails, including 70 nest boxes, are in Brambleton. 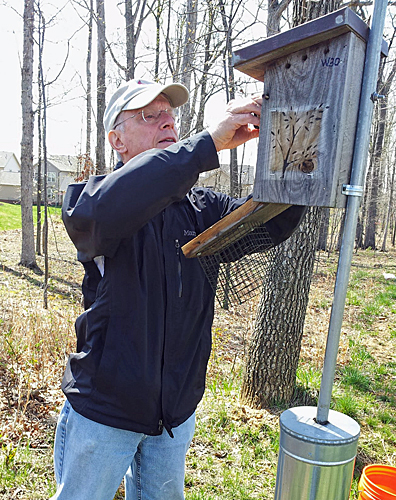 Programs of this size work because of “unsung heroes” like Ken Dzombar, who work tirelessly behind the scenes. Ken’s involvement with the Brambleton Bluebird Trails began 10 years ago, when he and his wife moved to the area to be closer to their children and grandchildren. He joined the Brambleton Bluebird and Garden Club and became a nest box monitor. He later became a trail leader and coordinator of the club’s activities. As coordinator, Ken oversaw all the Brambleton trails by organizing monitors, doing maintenance on the boxes, inspecting the trails and providing year-end data to Loudoun Wildlife.

Thanks to Ken’s dedication and leadership, he and the Brambleton monitors recorded 833 Bluebirds fledging over the past 10 years — along with 57 Chickadees, 68 House Wrens, and 536 Tree Swallows! “Ken was always so very helpful and willing to jump in to assist,” former Bluebird Coordinator Karla Etten says. “He is a natural leader, having a military background. I truly enjoyed volunteering with Ken, as he always brought a can-do attitude and his jovial nature.”

Last year, Ken estimated he volunteered 790 hours for the Loudoun Wildlife Bluebird Program during 2020 — about 15 hours a week for the entire year. When you take into account that the bulk of the work is done during the Bluebird season (late March through August), he volunteered approximately 35 hours a week on the Brambleton Trails and at 50 West Vineyard Trail, where he has been the trail leader for five years.

Ken shares his interest and knowledge with his family, who have had backyard nest boxes since his children were young. His wife, Joanne, told us, “This year, Ken assisted his eldest daughter in building two boxes, one for her backyard and one for her sister’s backyard, thereby continuing the family tradition.” She said Ken also helped a local Girl Scout troop build four boxes to replace decaying ones on Brambleton’s Pond Trail, and assisted a young man with his Eagle Scout project to build and install 10 new boxes on another larger Brambleton trail. Additionally, Ken is assisting the program this year by training Bluebird monitors and the trail leader on a new trail in the Birchwood community.

Please join us in expressing our gratitude to Ken Dzombar for all his work and for passing his knowledge and skills on to the next generation.

Tags: bluebird monitoringVolunteer of the quarter
0