Celebrating Birds: The Phenomenon of Migration

Every day, any time of day, somewhere in the Western Hemisphere, birds are migrating. The peak of migration in our area occurs in May and then again from late September through early October. As Scott Weidensaul wrote in his book Living on the Wind , “If it is spring or fall, the great pivot points of the year, … continents are swarming with billions of traveling birds — a flood so great that even the most ignorant and unobservant notice, if nothing else, the skeins of geese and the flocks of robins.”

Some birds migrate during the day. Many others, the majority in terms of sheer numbers, migrate at night, generally beginning about a half hour after sunset. Those observers fortunate enough to watch this on radar see what appears to be a great cloud rising from the landscape.

About 75% of North America’s 650 nesting bird species migrate. While some of these birds will only move a few states, others will shift all the way to Argentina. In some areas a species doesn’t migrate at all, while in another only the females migrate. Dark-eyed Juncos, often called snowbirds because they go south for the winter, are an example of this. Some young male juncos never leave Canada during their migration, while adult females will go all the way to the southern U.S. Young males migrate the shorter distance, perhaps so they can be the first to return home to establish a territory. 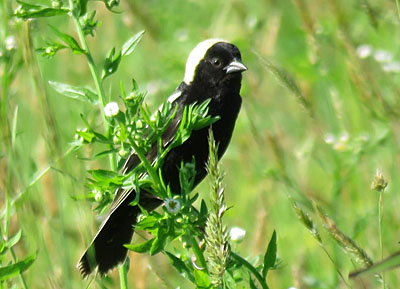 Although some species never leave the U.S., many go to Mexico and Central America and about 50 species go all the way to South America. Only about 10 songbird species, including Eastern Kingbirds, a common summer resident in Loudoun County, and Bobolinks, a rapidly disappearing summer resident in the county, travel beyond the Amazon basin. Bobolinks, a delightful and attractive blackbird with an incredible song, have the longest migration of any blackbird species, traveling from North America to northern Argentina. Like many migrants, both sexes return to the same nesting grounds year after year. While some Bobolinks follow the coast south, others travel out over the Atlantic on their journey to South America.

Another fascinating aspect of migration is the role of fat. Fat deposits in non-migrating birds are about 5%, while long-distance migrants build their fat reserves to 50% or more of their total body weight before they begin migration. The Ruby-throated Hummingbird, the only nesting hummingbird in the eastern U.S., normally weighing about 3 grams (0.11 ounces), increases its weight by 2 grams (0.07 ounces), or by two-thirds, for its journey. As a result it can fly across the Gulf of Mexico nonstop if the winds are right. 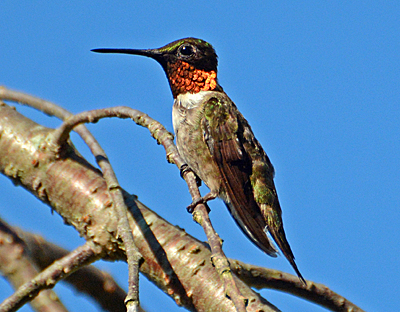 Ruby-throated Hummingbird rests on a branch.
Photo by Katherine Daniels

Unfortunately, the phenomenon of migration is showing signs of trouble. For over a century the Migratory Bird Treaty Act of 1918 was the cornerstone of bird protection. Last year the current federal administration severely weakened this protection. Even before then, humankind’s footprint on the land was having a strong impact on birds. With increased habitat loss and all the other ways humans have impacted the natural environment, birds are struggling. It is up to us to recognize what is happening and to do something about it now.

Scientists have learned a tremendous amount about migration recently, but because a great deal of research is continuing, what we know about migration is constantly evolving. For more information on this very complex topic you can review these resources:

•All about Birds by the Cornell Lab of Ornithology, an online resource accessed at www.allaboutbirds.org that is constantly being updated.

•Living on the Wind: Across the Hemisphere with Migratory Birds by Scott Weidensaul (North Point Press, 1999).

•The Sibley Guide to Bird Life and Behavior by National Audubon Society (Alfred A. Knopf, 2001).