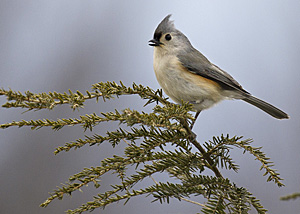 Look for Tufted Titmice (Baeolophus bicolor) like this one in your neighborhood.
Photo by David Boltz

The Tufted Titmouse (Baeolophus bicolor) is one of the most charismatic birds in our region. It’s always a treat to see them come to backyard feeders or to hear their familiar “Peter-Peter-Peter” song echoing through the woods. Their perky crests and large eyes give them a curious and endearing expression. Titmice are in Virginia throughout the year, and pairs will stay in the same territory during the nonbreeding season. Juveniles born during the previous breeding season often stay with their parents at least until the next spring.

Titmice are among the most active and alert birds in our area. They are quick to respond when other birds are agitated and love to join in whenever a predator is being mobbed. This curiosity often leads them to respond readily to “pishing” by birders. Other birds may associate with Tufted Titmice in mixed feeding flocks. It’s to their advantage because they can listen for the scolding call of a titmouse, which tells them to take evasive action.

Titmice love to eat sunflower seeds, but also enjoy other seeds, suet, and peanuts. They will often swoop in, grab a seed, and fly off with it. Titmice don’t always eat every seed that they grab from your birdfeeder right away, however. They will often carry and then deposit some of the food they acquire into a nearby cache. These storage sites are usually within 130 feet of a feeder. Tufted Titmice might tuck seeds under the bark of trees or even in a mulch pile. On a cold  inter day, that extra food can really come in handy.

Like their relative, the Carolina Chickadee, Tufted Titmice nest in cavities, but they are unable to excavate their nest holes themselves. They depend on old woodpecker holes for living space. Inside the cavity, they will create a cup-shaped nest made of grass, moss, and leaves. Their nests are often lined with hair. According to the Cornell Lab of Ornithology, the list of hair types identified from old Tufted Titmouse nests includes raccoons, opossums, mice, woodchucks, squirrels, rabbits, livestock, pets, and even humans.

Tufted Titmice are found throughout the eastern region of the United States. In fact, their range appears to have expanded northward during the past few decades. Climate change and the prevalence of backyard feeders may be contributing to this trend.

There are several other species of titmice in North America. In south Texas, the Black-crested Titmouse used to be considered a subspecies of the Tufted Titmouse but now has full species status. Western birders can find the Bridled, Oak, and Juniper Titmouse in their region.

All these birds are entertaining to watch going about their daily lives, either in your backyard or in your local park. The next time you get a chance, look and see what your local Tufted Titmice are up to. It might very well brighten your day!