Celebrating Birds With an Astounding 150 Species

by Bryan Henson and Joe Coleman

Loudoun Wildlife Conservancy celebrated bird migration this year with several walks, our first Big Sit, a Birdathon, and the publication of the book Birds of Loudoun. Between the six Birdathon teams, the eight walks, and the Big Sit, we found an astounding 150 species of birds! To put that into perspective, our teams and groups found nearly 73% of the 206 birds seen in Loudoun County in an ENTIRE YEAR as documented by eBird.

The six different teams who participated in the Birdathon ensured that it would also be a success:

• Together, the Birdathon teams raised almost $13,000, considerably more than during any previous year.

• Shrike Force raised the most money, more than $4,800, but every team raised a substantial amount, contributing to the best total the Birdathon has ever raised.

• The Raven Loonatics observed the most bird species, 115.

• The six Birdathon teams together found 141 species, several of which were true rarities. 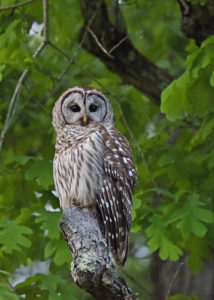 Each Birdathon team chose a 24-hour period between late April and mid-May to conduct its watch.

Outside of the Birdathon, participants in the various walks and other events found a total of 117 species. Interestingly enough, while the Birdathon teams found all four of the owl species that nest in the county, the walks didn’t find a single owl.

All of us were impressed with Loudoun’s stunning natural beauty and richness — from the Potomac River as it flows by Algonkian Park, to the lushness of the Dulles Greenway Wetlands at dusk with a violent and intense storm approaching from the west, to watching both the rising and setting sun turn the Blue Ridge Mountains a beautiful greenish blue. Two of the teams were lucky enough to see Blue-gray Gnatcatchers building their beautiful lichen-covered nests; others got to see a Bald Eagle on its nest. Three of the Birdathon teams observed Cerulean Warblers, a Species of Greatest Conservation Need in the Virginia Wildlife Action Plan.

All of us were also reminded that while some of these areas are protected, many others are not, and without our continuing efforts and your assistance, they could be lost.

The Birdathon teams and all the walk leaders thank you for helping the Loudoun Wildlife Conservancy protect the homes of Loudoun’s wildlife.