A light covering of snow covering the trails and trees at Banshee Reeks greeted 10 birders Saturday morning on the regular monthly Banshee Reeks Nature Preserve bird walk. During the first part of the walk the melting snow on the trees frequently dripped on our binoculars and cameras on the trails on the western edge of the nature preserve next to the Goose Creek where we found 33 species. 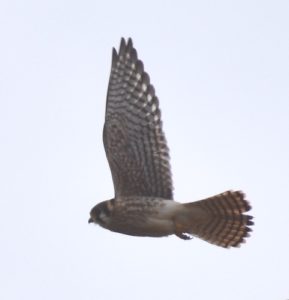 For the most part the highlights of the walk were the flyovers including a flock of about 40 Tundra Swans, a first of the season of Wood Duck flying along the Goose and squealing loudly, and numerous Ring-billed Gulls flying to the nearby landfill. After Bryan Henson and Allison Gallo joined us late in the walk we heard a Raven and watched a calling American Kestrel circling overheard before landing on a wire with a fat mouse that it took its time devouring.

The only numerous passerines were White-throated Sparrows and Northern Cardinals. One large mixed flock did include five Golden-crowned Kinglets along with a couple of Carolina Chickadees and Tufted Titmice, the latter two species more uncommon than kinglets for most of us this winter.

For a complete list of the birds observed at Banshee Reeks yesterday see the eBird report below.

The regular monthly free bird walk (every second Saturday) at the Banshee Reeks Nature preserve is sponsored by the Loudoun Wildlife Conservancy and the Friends of Banshee Reeks.

You can also join us for our regular (every fourth Saturday) at the Blue Ridge Center for Environmental Stewardship in northwestern Loudoun County near Harper’s Ferry. 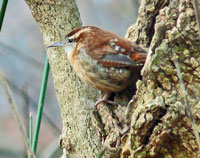 View this checklist online at https://ebird.org/view/checklist/S53629790

This report was generated automatically by eBird v3 (https://ebird.org/home)