It’s hard to believe that the now common Wild Turkey (Meleagris gallopavo) was once endangered. Today, it’s not uncommon to see a single bird, or even an entire flock– also known as a rafter, gobble, or gang among other things – when out on a morning hike in the woods or unexpectedly strutting along the roadside on your morning commute. Wild Turkeys sometimes make the news when one frequents a local coffee shop, fast food restaurant or becomes attracted to a moving car.

In the early 20th century, the Wild Turkey population was so depleted due to hunting and habitat loss that there was concern for its extinction in North America. Today, after successfully implementing restoration programs there are close to eight million Wild Turkeys in the continental United States, with the majority inhabiting the eastern and southern states – including a healthy population right here in Loudoun County.

Turkeys were popular with Native Americans for both sustenance as well as for the birds’ beautiful plumage, which was used to adorn the native’s wardrobe and horses. After the arrival of English colonists, turkeys became a mainstay of the colonial diet. There was also a great deal of respect for this courageous, fierce bird. The story has been told many times that Benjamin Franklin argued in favor of the Wild Turkey serving as our national symbol on the great seal, although this is only partly true. The Bald Eagle had been selected for this distinct honor; however, its depiction, to Franklin, represented the head of a turkey, not a bald eagle, which he found preferable. After noting that eagles were commonly seen stealing prey caught by other predators, Franklin stated that “the Turkey is in Comparison a much more respectable Bird, and … a true original Native of America. He is … a Bird of Courage, and would not hesitate to attack a Grenadier of the British Guards who should presume to invade his Farm Yard with a red Coat on.” 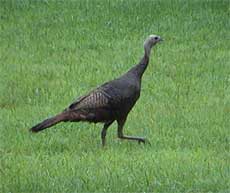 This respect was largely due to the fact that the Wild Turkey is not only a handsome bird, boasting iridescent dark plumage and a massive fan of a tail, but is also formidable and intelligent. Wild Turkeys are highly alert and intelligent, both in evading predators and in their hunting and foraging skills. They are very quick on their feet, running up to 25 miles per hour, the speed of an Olympic sprinter, and can fly for short distances up to 50 miles per hour. A turkey is even capable of swimming if necessary, tucking its wings at its side, spreading its tail and paddling with its feet, similar to a duck. The reputation of being slow, both intellectually and athletically, is most likely the result of the evolution of the farm-raised turkey, which is bred to be heavy-breasted, and not necessarily intelligent. The unflattering reference of calling someone “a turkey” applies to the Wild Turkey’s domesticated cousin, not the handsome bird of the forest and field.

In addition to its ample, thick plumage, the Wild Turkeys boast a large wattle and head that can change color from white to red to blue, depending upon the emotional state of the bird. Though female turkeys also have wattles, those on the male are much more prominent, and there is some evidence that males with the most brilliantly colored wattles hold more social standing and are able to attract females more easily than their scantily-wattled peers. The wattle is quite important during courtship. The male, or tom, performs an expertly choreographed ritual in his efforts to pique the interest of hens during mating. Puffing up his bountiful feathers, fanning his massive tail feathers and lowering his wings, the tom begins his impressive display as he slowly struts in front of the hens, rattling his plumage and making deep humming and chugging sounds. This exhibition is also intended to warn off other competitive males.

Another interesting feature of Wild Turkeys is the beard which is a tuft of modified feathers that look like bristles growing from the center of the breast. Typically only males grow beards but in some flocks up to 20 percent of females also grow beards. Beards may be used to age a tom as they grow longer as he matures. Occasionally, a tom grows multiple beards.

Being polygamous, one tom may have a harem of several hens. The hens lay one clutch of 10-15 off-white eggs with reddish brown spots, often laying their eggs in the same community nest. Hens build their nests on the ground, which is usually a shallow depression with little adornment under a bush or at the base of a tree. Eggs are incubated for approximately 25 to 30 days.

Hatchlings, known as poults, leave the nest shortly after hatching. Females feed hatchlings for the first few days after which they feed themselves by mimicking the hens. Toms are not involved in the raising of the young. Poults quickly learn to search the ground for small seeds and roots and are brooded by the females only at night until they become fully independent and are full grown, which takes several months. They are able to fly for short distances after one to two weeks.

Hens and poults continue to travel together forming a large community of up to 200 birds or more. There is a distinct hierarchy, with a matriarch firmly in place among the females while the toms constantly fight and jostle for top position. Outside of breeding season, the males often travel in large rafters together.

Wild Turkeys are omnivorous. Their varied and expansive diet includes a wide variety of seeds, nuts, berries and grasses, a variety of insects, spiders and grubs as well as snails, frogs, crabs and snakes. They tend to roost in trees at night and prefer to forage on the ground during the early morning hours by scraping up the dirt to reveal roots and bulbs just beneath the surface. On walks through the woods, it is common to see turkey scratches on the forest floor, evidence of their constant search for food.

Despite being one of the larger and more formidable birds, turkeys face many predators, which is why traveling in large numbers is helpful in protecting the flock. Large mammals such as bobcats, coyotes, raccoons, eagles and humans pose the greatest risk to mature turkeys. Their nests are also extremely vulnerable, and both eggs and hatchlings can fall prey to owls, raccoons, skunks, and snakes.

Turkeys are particularly fond of acorns and our heavy oak forests are a perfect habitat for them. If you’d like to make your property more turkey friendly, plant vegetation that yields nuts or berries. If you are lucky enough to already have nut-bearing trees such as oak, hickory and walnut, or bushes that produce berries, you may already enjoy the sight of wild turkeys foraging in your yard.

The best time to see Wild Turkeys is early dawn when they are seeking food. By simply remaining quiet as you hike through the woods or along the edge of the tree line, you may see a few individuals, or an entire flock, of magnificent Wild Turkeys ambling along. In the evening, you may spot turkeys flying from tree to tree as they settle into their roost for the night. We are lucky to have a plentiful population of Wild Turkeys in Loudoun. Their exuberant gobbling and spectacular appearance make them treasured residents in our community