“A room of its own is biodiversity’s only requirement.” David M. Carroll, Following the Water

The entrance to the Dulles Greenway Wetlands Mitigation Project is deliberately unassuming; access is granted only by permission and otherwise prohibited. While limiting the number of visitors may seem a harsh restriction, it affords an undisturbed natural habitat and protects the delicate synergy between water, land and those finding refuge here. The Loudoun Wildlife Conservancy has permission to monitor these 149 acres for wildlife. And even though private status means wildlife viewing is not available to the general public, Loudoun Wildlife holds occasional walks in the wetlands offering a window into this “room” of lush biodiversity. We always tread lightly and maintain a respectful distance when viewing wildlife in the wetlands, ever mindful of the precious nature of this extraordinary place. 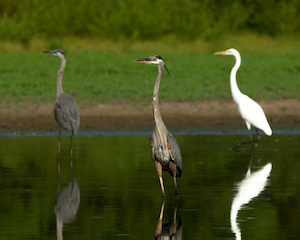 The wetlands project was established in the early 1990s by the Toll Road Investors Partnership II (TRIP II) to mitigate loss of wetlands resulting from the construction of the Dulles Greenway. It is bordered by the Goose Creek, the Oatlands Historic District, the Courtland Farms Rural Village housing development, and farmland. Combined, these properties create a buffer around the wetlands and ultimately encompass entire ecosystems including wetlands, woods and meadows. These are connected by soil, water and wind and the footed, finned and winged creatures that do not recognize borders or lot lines. The creation of the Dulles Wetlands established a watery Grand Central Station and a “room” for biodiversity to exist without human interference.

Wetlands are the most biologically diverse of all ecosystems. Interfaces between terrestrial and aquatic habitats, wetlands possess a unique mix of conditions and interactions resulting in a high level of nutrients that nurture abundance and biodiversity. Wetlands act as filters cleaning and recycling water, as giant sponges that help protect us from flooding, and as buffers preventing erosion. Wetlands also absorb greenhouse gases and assist in slowing global warming. Wetlands are stopover locations for migratory birds, provide nurseries for insects, amphibians, reptiles, birds and other animals, and are rich sources of food for wildlife.

Despite the tremendous benefits of wetlands, we have been destroying them at a tremendous rate. According to the United States Department of Agriculture (USDA), “By 1984 over half (54 percent) of all the wetlands in the U.S. had been drained or filled for development or agriculture.” The Dulles Wetlands is even more precious knowing the vital role it plays and how increasingly rare the wetlands ecosystem is in today’s developed society. 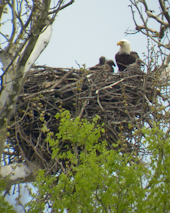 Typically, walks led by Loudoun Wildlife Conservancy in the Dulles Wetlands begin by paying respects to the reigning pair of Bald Eagles. This pair has shared their story since 2007, demonstrating how a nest is remodeled each year beginning with repairs during winter, both eagles carrying sticks and carefully arranging them just so. When all goes well, they treat us to glimpses of bobble-headed nestlings peering over the edge of their massive nest in early spring, looking more like miniature Loch Ness monsters than the magnificent raptors they will grow up to be. As summer blossoms, young eagles join their parents in the sky and begin their apprenticeship as hunters. Later in the year, we delight in spotting the growing number of immature Bald Eagles recorded across Loudoun County and hope one is a Dulles Wetlands eaglet.

Beavers also find refuge in the Dulles Wetlands and are welcomed for their natural engineering skills. Too often viewed as destructive, beavers are the foundation species for wetlands; by removing trees and slowing the flow of water with dams, they establish and maintain the conditions needed for healthy wetlands. Their profound impact on land and water is evidenced by their “trail markers,” or gnawed stumps and twigs, and the nutrient-rich pools of the wetlands landscape.

The Dulles Wetlands hosts a prolific bluebird trail where Eastern Bluebirds, Tree Swallows and House Wrens raise their next generations. It is also a registered Monarch Waystation. Vibrant milkweed patches and native nectar plants, including varieties of asters and goldenrod, thrive and invite pollinators, especially our cherished Monarch butterflies. Many species of reptiles and amphibians make the wetlands home, including Painted, Snapping and Box Turtles, Garter and Rat Snakes, and Spring Peeper, Pickerel, Cricket, Gray Tree and Green Frogs, among others. The frog chorus in spring and early summer announces their appreciation for the desirable breeding habitat found in the Dulles Wetlands.

A designated special area in the Loudoun County Bird Atlas, 156 species of birds have been tallied in this relatively small location, with high numbers of Great Blue Herons, Great Egrets, waterfowl and shorebirds recorded. The 2012 Christmas Bird Count team reported a rafter of more than 60 Wild Turkeys foraging in the southern portion of the wetlands! Rarities, too, make appearances such as White Ibis, American Bittern, Black-billed Cuckoo, Loggerhead Shrike (a statethreatened species), and even a Western Kingbird observed in 2009. Migration brings many visitors, especially long-distance traveling warbler species that rest and refuel in the insect-rich sanctuary.

Loudoun Wildlife Conservancy atlas data collectors listed 83 species of birds as confirmed or probable breeders in the Dulles Wetlands. Bobwhite and Grasshopper Sparrow are considered possible breeders. The rapidly declining number of these two species is due to various factors but is particularly related to the loss of the undisturbed grassy fields they require for nesting on the ground. In some cases, the Dulles Wetlands is the only location where a species has been confirmed as breeding in our county. We were thrilled to add Hooded Mergansers to the list of county breeders when a wetlands bluebird monitor observed a female with ducklings bobbing behind her last spring. The wetlands’ undisturbed habitat is a tremendously important refuge for our breeding birds. 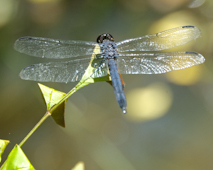 There are many creatures we see but it is also important to consider what is not visible. Wetlands teem with billions of microscopic algae, bacteria and fungi. In rivers and streams, the constant flow of water carries away nutrients. This is not the case in wetlands where nutrients accumulate. This nutritional “soup” is one of the reasons wetlands are so productive. Bottom sediments consist of decayed material and other leftovers which feed bottom dwellers including snails and mayfly larvae. These in turn become foods for shorebirds, waterfowl, amphibians and fish. Free-swimming larvae of insects, such as mosquitoes, dragonflies and damselflies, eat and are eaten, becoming prey to larger species of fish, birds and reptiles, each part of a complex food web dependent on water. Wetlands plant life, such as cattails, are adapted to growing in water and create excellent hiding places for “invisible” birds such as Virginia Rails, which typically remain hidden except for their pig-like grunts and “kiddick” calls.

Walks in the Dulles Wetlands are often meandering affairs, guided by what we see and hear. Sometimes the only trails are those made by deer; brambles seem to grow overnight. Every turn gives reason to pause and reflect. Closer inspection of a spider web reveals a silk zig-zag, warning birds not to fly through, thus protecting the spider’s labors. Another look at a slightly off-shade of green on a cattail exposes a Gray Tree Frog, trying its best not to be noticed. We hear the dry rattle of a Belted Kingfisher and see her flying with a fish in her bill, and hope she has a nest hidden at the end of a tunnel in the bank of Goose Creek. In winter, we’ve delighted in the discovery of icy slides made by otters and imagined them gliding into the creek just for fun.

Keeping the wetlands protected from development, pollutants and human footprints creates this magnificent “room” for biodiversity. Common or rare, visible or not, each part plays a critical role intimately connected to the others – especially the humans who protect it.