To those of us who treasure the Dulles Wetlands as a place of nature at its liveliest, the secretive rails are birds that truly evoke the marsh’s aura. Rails are solitary and shy, more often heard than seen. They are small to medium in size, with short tails, stubby wings and cryptic plumage in earthy tones, ranging from light buff to dusky olive to rich rufous. Everything about them is designed to help them avoid being noticed – a rail can suddenly be going about its business within 6 feet of you leaving you to wonder, how did it get from there to here undetected? 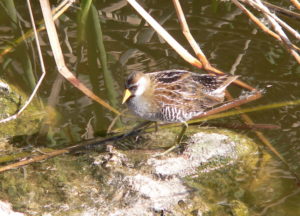 If you viewed a rail head on, the source of the expression “thin as a rail” would become clear – their bodies are compressed laterally, enabling them to move secretively through tall grasses without so much as a ripple. Some observers even believe rails use the pathways of mice when moving through dense vegetation. Most rails have legs and feet resembling those of a chicken, which are well adapted for moving over the mud at water’s edge, but they also swim fairly well. When flushed from a marsh, a rail may seem ungainly and almost helpless in flight, with its long legs dangling and wings beating quickly before dropping back into the grasses. But this impression is far from fact, as rails have made it to the most remote, inhospitable islands and adapted to conditions that support few other birds.

There are six true rail species in the eastern United States, four of which have been documented in Loudoun County wetlands. Only one of these, the Virginia Rail (Rallus limicola), is likely to breed in our wetlands. Sora (Porzana carolina) and more rarely King Rail (Rallus elegans) are occasionally found here but likely breed elsewhere. And the “ki-ki-do” call of the tiny, extremely secretive Black Rail (Laterallus jamaicensis) is only rarely heard in our county.

Rails keep in touch in their dense habitats with loud, regular vocalizations, usually at dawn or dusk when they are most active. They produce a remarkable array of sounds, from claps and grunts, to whinnies and ticks. Rails are omnivores, eating a wide variety of invertebrates and plant matter, but will also eat small vertebrates and even carrion.

Rails must contend not only with climatic conditions that alter their habitats, such as drying marshes and ponds they once inhabited, but also with man-made changes, especially the draining and degradation of wetlands. The incursion of large waterfowl, particularly Canada Geese, into wetlands appears to be detrimental as well, as rails tend to be aggressive toward any other birds in their large territories when nesting.

To most of us, rails are birds of mystery, as are many inhabitants of the wonderful but mysterious marsh and wetlands environments. A glimpse into their world gives us yet another reason to preserve this abundantly productive, yet fragile, ecosystem.

Reference Atlas to the Birds of North America, National Geographic.