Should I Buy Monarch Caterpillars? In a word — NO

As we enjoy spring and summer and look to the skies and our gardens for Monarchs, it’s really important to resist the urge to buy Monarch caterpillars through butterfly breeders. If you want to raise & release Monarchs – find them in the wild on your milkweed plants. 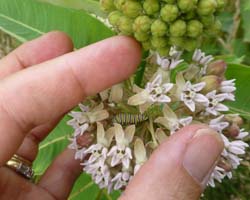 Plant your milkweed and nectar plants this May/June, and watch for Monarchs. Check for eggs & caterpillars in August – that will be our best window.

Bring back the milkweed and nectar plants and the Monarchs will do their part!

Lincoln Brower and his colleagues summed it up best and we’ll simply share the reasons here – bottom line up front: Mass breeding inevitably encounters more disease. Releasing Monarchs with disease into a wild population that is already on the brink could be the final straw that ends this.

Please deter anyone you know (especially teachers) from buying Monarch caterpillars!  [Last year we heard about a local school system that purchased hundreds of Monarch caterpillars – most died – a terrible experience for the kids – and those that lived were released – but very likely with disease]

Can we help monarchs by buying and releasing captive-reared individuals? With the reports of low monarch numbers, many people are considering purchasing monarchs from commercial operations and releasing them to augment local populations.

We suggest that this practice is unlikely to benefit monarchs, and could actually hurt them, for the following reasons:

1. Disease
Mass-production of monarchs makes it easy to transmit disease. Monarchs did not evolve under conditions in which they developed in large groups, and are very susceptible to diseases that can be transmitted among larvae. There are no requirements that breeders follow specific disease-preventing protocols, nor are there outside agencies that routinely test captive stock for diseases. In our research labs, we raise only a fraction of the numbers of monarchs that breeders sell, and use hospital-like sterile conditions. Even under these conditions, it is hard to keep pathogens in check. The most common monarch pathogen, Ophyrocystis elektroscirrha (Oe), is the easiest to screen for and keep out, but doing so requires constant vigilance. In the recent past, we have noted that some commercially purchased monarchs were heavily infected with this parasite. We occasionally get unknown pathogens affecting monarchs in our labs (suspected Serratia, Nosema and cytoplasmic virus that have been introduced from wild-caught material); these pathogens often kill 30% or more of our monarchs. Three of us have been rearing monarchs from wild material for over two decades, and these die-offs in our study animals only started happening to us in 2004-05. While we don’t know why this is, it coincides temporally with increased releases of commercially-bred monarchs. We wonder if there are pathogens that are common in wild monarchs now that can be traced to these releases. There is strong evidence that the dissemination of commercially-bought bumblebees used to pollinate glasshouse tomatoes has helped spread two key pathogens, Crythidia and Nosema, into wild bumble bee populations in North America, and this appears to have driven at least one species extinct in the wild.

2. Genetic diversity
The loss of genetic diversity among wild monarchs is also a concern. We don’t know how many parents are contributing to the genetic stock of any given purchase, and it seems likely that breeders will share stock to augment their breeding colonies. Thus it is very possible that many of the released monarchs could be related. The release of large numbers of individuals with low genetic diversity could contribute to further declines due to inbreeding depression.

3. Deleterious genetic adaptations
Studies in species as different as fruit flies and fish show that animals can adapt to captive conditions in as short as one or two generations. When this happens, researchers see a high frequency of alleles that would be harmful or have reduced survivorship in the wild. The more captive generations, the more extreme this effect. Here is a quote from a review paper on this topic:

“In captivity, species adapt genetically to the captive environment and these genetic adaptations are overwhelmingly deleterious when populations are returned to wild environments” (Frankham 2008).

For all of these reasons, we do not advocate for the release of purchased monarchs to help restore the eastern monarch population. This could do more harm than good, especially if done on a mass-scale.