Birds provide an easy and powerful way to connect to our natural world. From a park bench in a busy city, to a feeder in a suburban yard and rural country farm, birds are everywhere! In 2009, the Loudoun Wildlife Conservancy launched a project that took bird watching to a whole new level. The 2009-2013 Loudoun County Bird Atlas challenges even experienced birders to carefully observe and listen to the birds around us, documenting their full range of behaviors and vocalizations. This level of observation often changes your outlook on birds and their connection to the natural world around them. 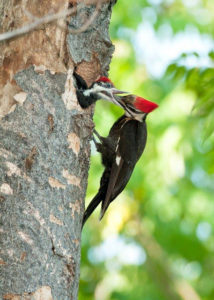 What exactly is the Loudoun County Bird Atlas? The atlas is a five-year citizen science project to establish a comprehensive list of breeding and non-breeding birds in Loudoun County, including their distribution throughout the county. Most bird atlases are conducted at the state level and collect data only on breeding birds. The Loudoun County Bird Atlas is unique (and even cutting edge!) in that the project is focused on a single county and collects data year-round for both breeding and non-breeding birds. The results of this project, organized and funded by Loudoun Wildlife Conservancy, will indicate important bird areas throughout the county and help us design conservation strategies to preserve these areas.  Thanks to the efforts and skill of over 60 enthusiastic atlasers, we have recorded more than 250 species in Loudoun County, with 103 of these species having a confirmed nesting status. The atlasers have spent over 5,000 hours in the field documenting 56,400 sightings.

Thanks to our partners at USGS Patuxent Wildlife Research Center, current atlas results can be viewed from the atlas website . The final results and conclusions will be published both electronically and conventionally and will be readily available to Loudoun County residents.

The Bird Atlas has met with great success, allowing us to draw comparisons between our current data and data collected during the 1985-1989 Virginia Breeding Bird Atlas (BBA). We are beginning to note changes in a few of our bird populations over the past 25 years. Some species have benefited from the environmental and habitat changes that have occurred, while others have not fared as well. One shining example of a species that has thrived is our national bird, the Bald Eagle. The 1985-1989 Virginia BBA did not document any evidence of breeding Bald Eagles in Loudoun County. Our 2009-2013 Bird Atlas has reported this species in almost every part of the county with breeding behaviors noted in 9 of 75 blocks.

The atlasers are the heart and soul of this project; it is their hard work and dedication that have made the atlas such a success. A complete picture of the Bird Atlas cannot be painted without their stories and insights. Here are a few personal highlights:

Atlasing has touched the lives of many atlasers, with a few of their insights as follows:

It’s not too late to join in the fun and help with this important project. As we enter our fifth and final breeding season, there are still atlas blocks in need of coverage. Experienced atlasers will be leading small groups on blockbusting surveys throughout the county. If you are interested in joining one of these groups or otherwise helping with the Bird Atlas, please contact Atlas Coordinator, Spring Ligi at sligi@loudounwildlife.org.

And remember, the next time you see a bird in your backyard or soaring through the sky, take some time to really observe and listen to it. You may be rewarded with an inside glimpse of its personal life. Get to know the birds around you. Happy Birding!