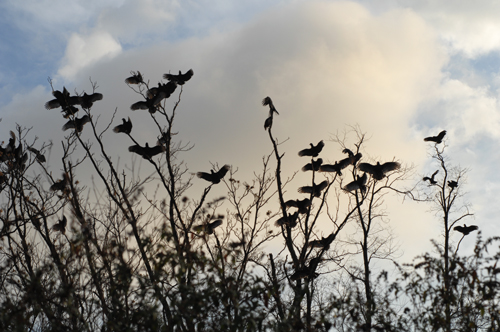 When Stan Shetler sent in his report for Sector 9 he wrote, “The only notable [species in my sector] … this season was the Red-breasted Nuthatch.  We saw two in the same pine woods across … from the [Lansdowne] Hospital where we get them every year, but even while we were counting them, the surveyors were marking off, for clearing, the trees in a first phase of development of this parcel.”  This, with a few notable exceptions, is the continuing saga of the now 10-year old Central Loudoun Christmas Bird Count (CBC).

Our second highest number of participants ever, 75 with eight of them under 19 (a new record), tallied a healthy 93 species of birds on this year’s count.  Unfortunately, the total number of birds observed was one of the count’s lowest and translated into only 140.8 birds per team hour, our lowest ever.  Two of the factors for this were the unseasonably warm weather and the fact that two of the count’s sectors were understaffed.  However, it is hard to ignore the continuing loss of wildlife habitat in Loudoun County.   Since 2000 Loudoun County has consistently been one of the country’s fastest growing counties and this has translated into the loss of a tremendous amount of habitat.  Bird species that thrive around people are doing well, others are not.

The count did have a couple of firsts, an immature Black-crowned Night-heron and a Virginia Rail.  Another nice sighting was a Loggerhead Shrike that Kurt Gaskill found.  This was especially nice because it wasn’t far from the one that Kurt found last year, leading one to hope they are nesting in that area.  As Teta Kain, the regional compiler for Virginia and D.C. wrote last year, “the march to probable extirpation of the Loggerhead Shrike … in Virginia continues.  For the past six years state totals have dwindled to the low teens.  This year’s [2005] total was 13, the lowest number recorded in 60 years.  In 1945, just six shrikes were found but there were only seven counts state-wide that year.”  In 2005 there were 47 counts.  Both the heron and the shrike were photographed.

Other highlights (and high counts) for the CBC include:
– a high of 626 Black Vultures.  The most we had ever seen before was 201 in 2001.
– two of the three common invasive species had high counts as there were 387 Rock Pigeons and 221 House Sparrows.
– the 17 Common Ravens that were observed confirm that this species is significantly expanding its territory beyond the mountains
– 49 Brown Creepers
– the 451 Eastern Bluebirds seen confirmed that this species has come back from whatever (probably am unusually cold, damp Spring and West Nile Virus) decimated their numbers in 2003 and 2004.

The lack of blackbirds was astounding and while also noted in some of our neighboring counts is probably the most significant indicator of Loudoun’s transition from a rural community to a suburban one.  While none of the blackbird species were seen in significant numbers, not a single Common Grackle was found on the count.

When the data for our count is combined with all of the data from other counts we will have a good picture of the state of North America’s bird populations for early winter 2006-2007.   For a preliminary view of those results and to compare different counts visit http://www.audubon.org/bird/cbc/.

Without the enthusiastic and knowledgeable participation of all the counters, the Christmas Bird Counts would not be successful.  Without their effort the world’s most significant and important example of citizen science would not be the massive success it has grown into.  They can’t be thanked enough for their efforts.