Though White-tailed Deer are some of the most abundant mammals in Loudoun County, many of us can still feel a thrill of admiration for this creature’s shy elegance. No matter how you feel about the deer population, though, the sight of a buck with a full antler rack is almost certain to take your breath away. 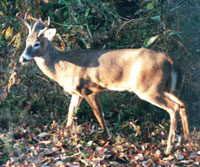 Male deer grow antlers, not horns. The sweeping antlers on a buck’s skull are not permanent, like the horns of a cow or antelope. Antlers are made of substance different from horns; horns are hollow and made of keratin (like your fingernails) while antlers are solid bone with a protective outer layer of skin. This special skin is very soft during the development of the antlers. It closely resembles its name: velvet.

Many people believe there is a correlation between antler size and the age of the deer. However, this is not necessarily the case. Testosterone sparks the growth of antlers during puberty, but the availability of food might have more to do with the size of antlers than the age of the animal. A well-fed buck will grow larger than a buck that eats less, and the size of the well-fed buck’s antlers will correspond with the overall size of its body.

John Weissinger at the Roger Tory Peterson Institute believes that antlers serve a larger role than simple physical protection. Large antlers assert “visual dominance” over other bucks and attract females. At the end of the velvet stage, deer rub their antlers on trees not only to remove the velvet but also to mark territory.

At the end of winter most deer begin to lose their antlers. At this point, Weissinger notes that there are no blood vessels connecting the skull and the bone of the antlers. The antlers eventually break away from the skull like a loose tooth falling out of a child’s mouth. The younger the deer, the longer it keeps its antlers. A deer with a full rack of antlers in May is much younger than a deer that lost its antlers in January.

If you search for dropped antlers during the last weeks of winter, don’t hold your breath until finding one. Dropped antlers are quickly eaten by rodents, rabbits, and other small mammals in the forest. The calcium and other minerals in the antlers are a great health boost for other creatures.

This “recycling” may provide part of the answer to a question biologists have been puzzling over for a long time: why do horned animals keep their horns while antlered animals lose their antlers? Wouldn’t it be more “efficient” for the deer to keep their antlers rather than grow a new set every year? Perhaps the shedding of antlers isn’t so much about the loss of a deer’s ornamentation, but the gift of nutrition it provides for other creatures in the forest.